This pie is basically me. I am this pie.

Every year, we eat pumpkin pie on Thanksgiving (and during the several days following the holiday). This year, I wanted to do something different, but not so different that it wouldn’t still be familiar. I switched out pumpkin pie spice for garam masala and the spices complemented the pie perfectly! Garam masala is made with spices like cardamom, cinnamon, cloves – all warming spices perfect for this chilly time of year.

I decided to make this recipe after reading about this story in the NY Times. In short – back in 2009, the Indian Prime Minister at the time came to the White House around Thanksgiving and the chef made a garam masala pumpkin tart for the occasion. Genius, right?

If you’re looking for something to spice up the holidays, then you’re going to love this garam masala pumpkin pie. It doesn’t have to be Thanksgiving – this pie will be a hit whenever you decide to make it! 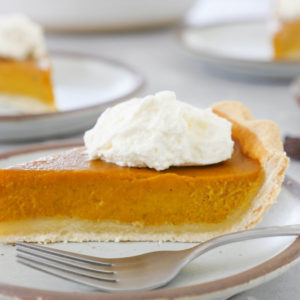 How to make whipped cream:

Just for fun, here’s a picture from 2014. This pie is pictured with an almond crust (see notes for that recipe).