This cashew cheese paleo paneer is a tasty option for those of you who love Indian food but can’t tolerate dairy.

I’m so excited about finally sharing this recipe for paleo paneer on my blog! It’s a recipe I came up with around 4 years ago when I first wrote my paleo Indian ebook. If you’re following a paleo diet, you’ll want to check out my ebook! I also have a lot of paleo Indian recipes on my blog.

While this recipe IS dairy-free, it is not vegan. You may be able to adapt the recipe to make it vegan, but I haven’t tried. You can read more about that later in the post!

How To Use Paleo Paneer:

You cannot use this paleo cashew paneer the way you’d use regular dairy paneer – they are different after all. Regular paneer is much more firm – cashew paneer is not. That’s why you’ll want to add paleo paneer to a dish at the very end – right before serving. You don’t want to put it in a super hot curry otherwise it’ll get too melty.

Keep the paleo paneer in the fridge until you’re ready to serve – then eat them once they come to room temperature.

You can add paleo paneer to recipes like saag or matar paneer. Or you can sprinkle a bit of chaat masala on top of it and serve it with chutney – yum!

This recipe for paleo paneer is not vegetarian – it calls for gelatin:

This recipe is made with gelatin (make sure you are using gelatin and NOT collagen) and unfortunately, gelatin melts in hot liquid – so when you add these to a recipe, you’ll want to add them at the very end right before serving.

I use grassfed gelatin and while you might be able to use a vegetarian gelatin substitute, I’ve never tried it that way so I can’t say for sure. If you try this with agar agar or using another method, let us know! I’ve been thinking about leaving out the gelatin and baking the “cheese” to see how that goes but again have yet to try… will update the post when I do!

I know when I was following a strict paleo diet I was pretty devastated about missing out on my favorite foods. That’s why I recreated so many Indian dishes to be paleo-friendly – including this paneer (and paleo jalebi, gulab jamun, etc lol). I hope you love this paleo paneer – and I hope that it makes your paleo journey a little easier. 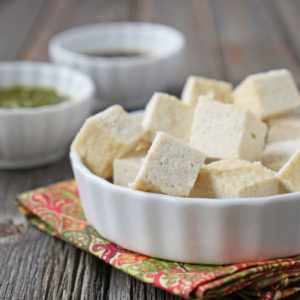 It's hard to believe these creamy melt-in-your-mouth cubes are dairy free. Keep them in the fridge until you're ready to serve them - then eat them once they come to room temperature.
5 from 3 reviews
Pin Recipe Print Recipe
Cuisine Indian

This recipe is made with gelatin (make sure you're using gelatin and not collagen). Unfortunately, gelatin melts in hot liquid so if you are adding the paneer to a recipe, you'll want to add it at the very end right before serving. I have yet to try a vegetarian gelatin substitute so I can't say whether it will work or not. If I try I will be sure to update the post!
Did you make this recipe?Tag @myheartbeets on Instagram and hashtag it #myheartbeets!