Did someone say paleo vada? Yes! I’m sharing a recipe for a lentil-free vada on the blog today. These deep-fried savory fritters are crispy on the outside, soft on the inside and best served piping hot!

This is my take on a paleo-friendly medu vada, a south Indian snack food often served with coconut chutney. Medu vada is normally made from a batter of ground up legumes – so it’s actually naturally gluten-free. The recipe I’m sharing today is legume-free and grain-free. It’s a recipe for those who cannot tolerate lentils or for those following a paleo diet.

what is a vada? why a paleo vada?

Vada is a type of Indian snack food. There are many different kinds and they are typically are made out of a batter consisting of legumes. I’ve already shared a recipe for paleo dahi vada on my blog which is just another type of vada.

So why a paleo vada? Well like I said above, I wanted to create a lentil-free recipe for those who can’t tolerate legumes and/or for those following a paleo diet.

Yep, there are people in the world who can’t eat legumes. We recently learned my husband can’t tolerate legumes (he also can’t eat almonds anymore… but that’s another story). While I personally enjoy eating lentils, I try to make it a point to share recipes on my blog for those who suffer from different allergies/intolerances because I know first hand what that’s like.

Instead of lentils, my recipe calls for a combination of paleo friendly flours: almond flour, arrowroot/tapioca flour and coconut flour.

This recipe is from a Paleo Indian eCookbook that I wrote back in 2015. I’m just now getting around to sharing this recipe on my blog. If you follow a paleo diet and love Indian food, then be sure to check my ebook out 🙂

To make these, you’ll need either a donut pan OR you can also use a donut maker if you have one. After you bake them, they’ll look like this:

They’re good but taste more like soft savory donuts – that is, until you deep fry them. That’s what makes them niiiiice and golden and crispy:

Let me know if you make these! And tell me if you want to see more paleo Indian recipes! 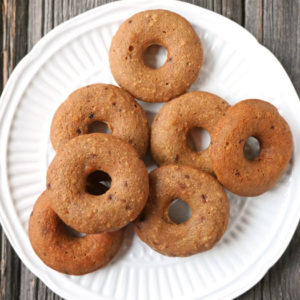 These savory donuts are tasty right out of the oven, but to make them taste more like the real thing, you’ll want to deep fry them so that they’re nice and crispy. These are delicious on their own or with chutney.
5 from 1 review
Pin Recipe Print Recipe
Servings 21 mini savory donuts

feel free to adjust the spices in this to your taste!
Did you make this recipe?Tag @myheartbeets on Instagram and hashtag it #myheartbeets!