The two stars of this Thai red vegetable curry: snap peas and water chestnuts. No matter how long you cook those two veggies, they’re going to keep their crunch. And the rest of the veggie cast in this production deserve your applause too: broccoli, carrots, mushrooms, and bell pepper. Those are obviously not going to be as crunchy (unless you add them at the end… but don’t do that). Still, what those vegetables lack in crunch, they make up for in another way.

For example, what broccoli lacks in crunch, it makes up for in its ability to absorb flavor. I looove broccoli in Asian-inspired dishes because it soaks up the sauce so well. I’m not going to go on and on about the rest of the vegetables in this curry (even though I totally could) because that’s kind of boring… I mean, who wants to read a blog about a girl obsessed with vegetables? (anyone?)

This Thai curry is the perfect way to transition from winter to spring because even though this is a dish that’ll keep you warm during early spring’s chilly weather, the abundance of fresh veggies will remind you that summer is right around the corner. 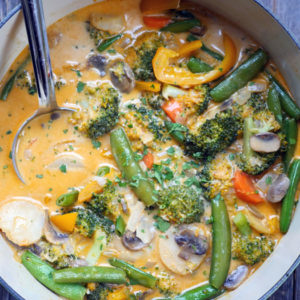