Right after Roby and I graduated college, he sent me two dozen roses. At the time, I made one of those “‘oh I love them, but you don’t have to do this for me again – they’re too expensive’” sort of remarks. For some reason, Rob really paid attention to that comment and for years, I didn’t get flowers (until I finally and not so nicely pointed out that he could probably start buying them again). To be fair, I think he genuinely thought I didn’t care for flowers… and I don’t, but sometimes you want them, you know? Sigh. Girls like me are definitely the reason why guys have no idea what it is that girls want. Well, let there be no doubt about this bacon bouquet – if you give me one (or five) of these, you’ve found the way to my heart.

These bacon bouquets are made with two ingredients: bacon and enoki mushrooms. If you’ve never had enoki before, they’re long, thin mushrooms with tiny white caps. Most Asian grocery stores (H-mart, Lotte, most local stores) carry these mushrooms – they’re often sold in a five ounce container with “organic” on the label. Enoki mushrooms are a mildly flavored mushroom, typically used in Japanese cuisine as well as Korean and Chinese cuisine. You can use enoki mushrooms by adding them to bone broth or as a topping for salads. I also like adding them toward the end of a stir-fry dish. When you eat these mushrooms raw, they’re crisp, but when you cook them, they become slightly chewy. I love the chewiness of this mushroom when combined with the crispiness of the bacon. That said, you won’t want to make your mushroom bundles too big – you want these to be small, chewy rolls wrapped with bacon.

Make these bacon wrapped beauties for someone you love. 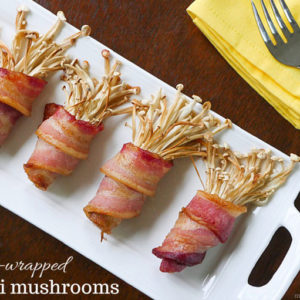