The first time I heard about beef cutlets was when I started dating my boyfriend (now husband), Roby, in college. He would always tell me about these cutlets that his mom would make him and I’d have no clue what he was talking about.

What in the world is a cutlet?

Well, in Indian cuisine, a cutlet can be made with either meat or potatoes or both. I grew up in a north Indian family and we called a “cutlet” something else: “tikki.” We usually made “aloo tikki” or “potato cutlets” at home. I didn’t realize that my husband, who is south Indian, and I both grew up eating almost the same thing until I finally tried my first beef cutlet. I remember telling him, ‘whoa! this is a tikki… but with meat!’ You may know cutlets and tikkis as “croquettes.” Isn’t it interesting how we’re all eating variations of the same thing around the world and yet calling it by a different name? Food for thought. Literally.

The cutlets that Roby grew up eating are slightly different than my recipe here – because my cutlets are gluten-free. Roby says they’re just as good though! Beef cutlets are typically made with white potatoes, coated with breadcrumbs and deep-fried. In my version, I use sweet potatoes and almond flour – then I shallow fry the cutlets in ghee. I’ll sometimes use regular potatoes instead of sweet potatoes – it’s really up to you.

These cutlets take a little time to prep. The steps are easy, but be patient. First, you’re going to cook the meat with all the spices and then mince the meat. I usually do this in my nutribullet or food processor. Add the minced meat to the onion mixture. It should look a little something like this.

Add the boiled sweet potatoes and then mix it all up. Make pretty patties and then put them in the fridge. This is the cutlet before going into the fridge:

When you make this dish with white potatoes, they hold together pretty well but when you use sweet potatoes, you really need to put them in the fridge so they’ll become firm. You can make them a day in advance if you’d like which will also help them firm up, making it easier to gently dip them in an egg mixture and then in almond flour.

After shallow frying these cutlets in a cast-iron skillet, they’ll look deliciously golden. When you eat them, you’ll see that the beef just sort of melts in your mouth and all that remains is the spicy kick it leaves behind.

If you enjoy these cutlets, be sure to check out my recipe for tuna croquettes too! 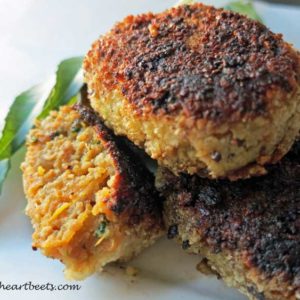 Serve with chutney, ketchup, whatever you like!
Did you make this recipe?Tag @myheartbeets on Instagram and hashtag it #myheartbeets!