Grinding your own whole spices makes a world of difference when it comes to cooking ethnic foods. This meat masala recipe is perfect for beef recipes. You can also use it with chicken, pork, lamb, and goat. “Meat masala” is also sometimes called “garam masala.” You should know that there is a HUGE difference between North Indian and South Indian garam masala. When you see a recipe, the authors typically don’t clarify WHICH region their recipe is from, so if you don’t know… well, you’re probably not using the right spices.

South Indian meat masala or garam masala comprises cardamom, cloves, cinnamon, fennel, etc. North Indian garam masala includes cumin, coriander, bay leaf, etc. The flavors are very different, and it’s important to use the right blend of spices for each dish. If I’m making a Kerala curry and use North Indian spices – it just won’t taste the way it should.

The recipe below is a Kerala meat masala – the spice mix can vary from home to home. I always keep a jar of this in my spice cabinet as it’s much easier to reach for this jar vs. several individual jars. I definitely recommend that you make this masala if you plan on continuing with South Indian cooking.

You can make this masala raw, or you can dry roast the spices before grinding. Personally, I prefer dry roasting because I think it tastes better. Also, I usually add spices at the very end of a recipe if I think a dish needs more flavor, and I’d rather use warmed spices than raw at that stage of cooking.

If you decide to dry roast, be sure to do it over low heat. You don’t want to burn your spices because they’ll become bitter. You want the whole spices to cook all the way through and not just on the outside. Roast them until fragrant, and then transfer the spices to a plate to cool right away. Don’t leave them on your pan, or they’ll continue to cook. Once you smell that beautiful aroma… they are done. Wait for the spices to cool and grind away!

What to make with meat masala: 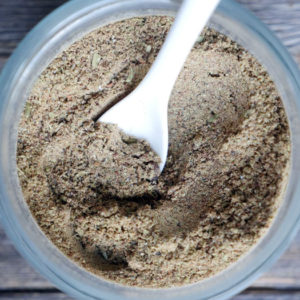