I’m pretty sure I can make a strong case for why these chai cupcakes should be considered a breakfast food. I mean, this is basically a cup of tea: chai spices, honey-sweetened, and topped with cream. Let’s ignore the fact that there are chocolate chips in these cupcakes, shall we?

Perhaps we can feign ignorance and refer to these sweet cupcakes as muffins (even though they are most certainly not). If I can play pretend with my toddler and make him believe that I genuinely enjoy eating his homemade spaghetti (which is actually just a bowl of miniature cars), surely you and I can pretend that these cupcakes are indeed muffins. Not that far of a stretch when you think about comparing spaghetti to cars.

If you’d really like to make this muffin thing a bit more believable, try reducing the amount of honey in the recipe. I’d much rather play pretend, though… have my cupcakes and eat them (for breakfast) too.

These cupcakes are very light, yet also rich. They’re sweet enough – not cloying in the least. A bit floral too, thank you, honey. A combination of flours (almond, coconut, and tapioca) make for a gluten-free and paleo-friendly cupcake with the perfect amount of moisture and crumb.

My favorite part about this cupcake? Other than the flavor and the aroma of the chai spices? The whipped cream topping. It looks like these cupcakes are wearing hats made of billowy clouds. Sounds fancy but looks rustic, though thanks to Pinterest, I’m pretty sure rustic is now fancy. Either way, the topping is very fuss-free.

Let’s talk a little more about this whipped cream “frosting”

Are you still with me?

You can use heavy cream or coconut cream if you’re dairy-free.

I think using homemade whipped cream may just be my favorite way to “frost” cupcakes. It’s drama-free, not aggressively sweet, and all up in your face the way that buttercream can be, you know? It’s sweet in a subtle kind of way. The type of sweetness that has you wanting more, unlike regular frosting, that you secretly try to scrape off when no one’s looking.

Whipped cream + chai cupcakes are meant to be. They are food soulmates. An unlikely pair, but once you eat them together, you realize it’s the only way. Know that if you skip the cream, you deny true love. 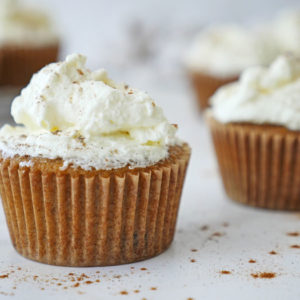 how to make whipped cream