Taro root, also known as “arbi,” is one of my favorite vegetables, probably because it reminds me so much of a potato. In this recipe, Taro root “coins” are cooked in a delicious, spiced gravy.

This recipe for arbi is kind of like an Indian version of scalloped potatoes – only, it’s more delicious than you can even imagine!

Arbi (taro root) cooks perfectly and easily in the instant pot and with my tasty spice combo, you’re going to end up with an incredible Punjabi dish.

Unlike a lot of instant pot recipes, this one does not call for a lot of sauce. Truthfully, I’m not a fan of drowning veggies in sauce — unless something is meant to be a curry, of course. Most of the time I prefer less-saucy vegetables which is why many of my instant pot Indian vegetable recipes are more on the dry side than the curry side (Aloo Gobi, Turnip Sabzi, Green Bean Thoran, Aloo Beans, Achari Aloo Baingan… just to name a few). This recipe for arbi calls for the perfect amount of masala – just enough to coat the arbi and cover it with flavor.

I tend to pride myself on my spice combinations and this taro root recipe is a winner you guys. It’s made with the most delicious blend of spices that go so well with arbi: ajwain, roasted cumin powder, black salt, amchur, and some of the regulars.

What is Taro Root? Where Do You Find it? How to Prepare it?

If you’ve never tried taro root before, it’s a root veggie that tastes a lot like a potato – only even better. It’s richer in flavor and denser than a potato and it’s also more vitamin-rich.

Taro root is a staple veggie in many parts of the world, including Asia and India. But here in the US, it seems like the only way I’ve really seen taro root prepared is in the form of chips. During a trip to Hawaii last year, I did try a traditional dish there called poi which is mashed taro root… it wasn’t my favorite, but still cool to try it prepared in a different way than what I’m used to.

You can usually find taro root at Whole Foods. You can also find it at your local Indian or Asian grocery store.

A few things to know about preparing taro root:

You might recognize this arbi recipe from my cookbook, Indian Food Under Pressure. When I wrote the book, I couldn’t decide what to call this recipe so my husband Roby came up with the name “Taro Root Delight” and that’s what I called it! This dish really is delightful 🙂

You can serve arbi as a side to any Indian meal. It goes well with flatbread, but rice works too! In fact, make some Rajma chawal and arbi and you’ve got a perfect Punjabi meal. Or make some of my Punjabi Chicken Curry or Achari Chicken Curry and serve it with this arbi! You really can’t go wrong with pairing this dish. Everything goes well with potatoes, right? Well, it’s the same thing with taro root! 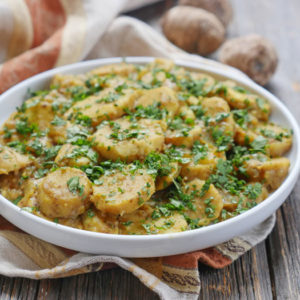 Taro root, also known as “arbi,” is one of my favorite vegetables, probably because it reminds me so much of a potato. In this recipe, Taro root “coins” are cooked in a delicious, spiced gravy. I like to think of this dish as an Indian version of scalloped potatoes!
4.88 from 8 reviews
Pin Recipe Print Recipe
Servings 4
Cuisine Indian

Roasted cumin powder is highly aromatic and has a more intense flavor than regular (unroasted) cumin. Do not substitute this with regular cumin as you won’t get the right favor. To make roasted cumin powder: heat a skillet over low heat and dry roast cumin seeds (I usually do 1 cup) for 5-10 minutes, stirring occasionally until the color of the cumin changes to a dark brown. Turn off the heat and allow the cumin seeds to cool down. Place the cumin into a spice grinder and blend until smooth. Store in an airtight jar and use within 6-8 months for the most flavor.
Did you make this recipe?Tag @myheartbeets on Instagram and hashtag it #myheartbeets!