This quick and easy one-pot chicken and rice meal is a great gateway dish to Indian cuisine. It’s aromatic and mildly flavored with Indian spices. Thanks to the instant pot, making chicken pulao is nearly effortless.

Everyone knows of chicken biryani, right? Chicken biryani is famous. Like hall of fame, superstardom level famous. Well, let me introduce you to chicken pulao, the quiet and shy relative of biryani who isn’t as interested in the limelight. Don’t get me wrong, pulao is still very special – pulao just isn’t an A-list celebrity if you know what I mean. Chicken pulao is the Solange to biryani’s Beyonce, the Gayle to Oprah, the Roby to Ashley (jkjk Roby). Still, there are times when you might prefer pulao to biryani.

Truthfully, I wasn’t even sure if I should share a recipe for chicken pulao on the blog. Why? Because with an Instant Pot, you can make chicken biryani and chicken pulao in the same amount of time. That’s right. Both take the same amount of effort to make. So why would anyone choose to make humble pulao over showy biryani? I’m going to tell you why of course!

For one thing – sometimes you just want a dish that’s a bit lighter, with a bit less spice. A dish that’s wholesome and delicious and isn’t going to steal the show/overpower other dishes. Chicken pulao is a dish that’s comfortable saying “hey, I don’t need to be the star today. Let’s all shine equally.”

Chicken pulao is also a great gateway dish if you’re introducing someone to Indian food for the first time or if you’re making this for kiddos who aren’t accustomed to spices. It’s familiar because it tastes like a regular pilaf… with chicken and aromatic whole spices.

In the past – as in pre-Instant Pot – chicken pulao was the easier dish to make compared to biryani which took far more time and effort. Pulao was a dish that Indian families served more regularly: on weeknights, for gatherings, whenever a nice – but quick – dish was required. Pre-IP, chicken pulao was made in Indian homes more often than biryani. And because of that reason, sometimes when I’m feeling nostalgic for pulao or am in the mood for something a bit lighter, I’ll opt for pulao over biryani.

The great thing about chicken pulao is that it’s easy to adapt – you can use whatever whole spices you prefer – just don’t forget the caramelized onions, those are key. And if you prefer a spicier pulao, just add cayenne or chili peppers or well, more spices.

A Note about Rice

If you’ve made my biryani before then you might notice that this chicken pulao is a teeny bit saucier than my chicken biryani – I think the reason for that is because there aren’t quite as many ground spices to soak up the extra moisture. For that reason, I suggest using basmati rice that will hold up under pressure.

I have said it many times – but this brand of rice – is my favorite when it comes to making basmati rice in an Instant Pot. The grains maintain their texture and remain separate. That can’t be said about all brands, so if you’re using a different brand you may need to reduce the cook time or the soak time. Play around with the cook time until you get the rice the way you prefer. I wish I could test all brands but the truth is, after buying aahu barah rice I really don’t want to use any other (not sponsored).

You can serve this chicken pulao with some raita and achar/pickle for a perfect and simple meal. It would also go really well with my curried tomato soup – a great way to use up those late summer tomatoes. 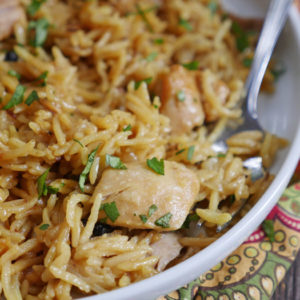