This is hands down the easiest and tastiest, and quickest recipe for chicken saag. A pour and cook instant pot recipe that takes minutes to prep and minutes to cook.

You will be in awe at how incredibly tasty and easy it is to make this chicken saag. It’s a dump and cook recipe – you just put everything into a pot and press start!

The fastest way to make the tastiest chicken saag:

This chicken saag recipe is unlike any other – there is no need to sauté anything. That’s right. And it tastes absolutely authentic.

How’s this possible? It’s all thanks to my pre-made onion masala. I really hope you’re familiar with my onion masala series by now, but if not – it’s where I share recipes calling for exact amounts of my magical masala. Having this masala handy makes it possible to cook authentic Indian meals in minutes. Actual minutes.

WATCH HOW EASY IT IS TO MAKE CHICKEN SAAG!

(for the full recipe, see the recipe card below 😋)

Add rinsed spinach to the pot, then add onion masala and chicken.

Remove the cooked chicken and cut it up, then blend the spinach (ideally with an immersion blender for ease). Stir the chicken back in, and you’ve got chicken saag, my friends!

Saag translates to “pureed greens.” You can use any green veggie to make saag, but I’m using spinach for this recipe. So technically, this is a palak (spinach) saag.

I’ve already shared a couple of instant pot vegetarian saag recipes on my blog if you want to check those out too: this Punjabi saag with spinach and mustard greens (no tomatoes in this recipe) AND this dump and cook palak paneer.

So… I have the craziest story to tell you guys. It’s seriously wild; brace yourselves.

The first time I made this, my toddler Tony ate it, and then he said… “this is good, mom.”

I didn’t have to bribe him. I didn’t have to ask him to eat the saag with promises of dessert. He just ate it. And then complimented me… on his own. And I beamed. I literally beamed.

It was the first time my 2-year-old (well, he’s 3 now but at the time 2) has ever verbally told me my cooking was good. And about a dish made with spinach, no less. One of my top 10 moments in life.

Even more impressive than getting my toddler’s approval… it has my father’s approval too (lol). As you might know (from the number of times I had to make and remake my gajar halwa, my chole, AND my rajma), his approval is hard to get.

This saag will win the approval of picky children and picky adults alike. 😂 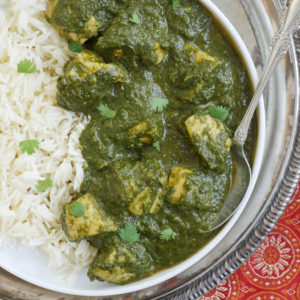