This vegetable masala pasta is easy to make: you literally toss everything into an instant pot and cook! It’s a dish that everyone in your house will love!

This Indian veggie masala pasta is flavorful and comforting. It’s a dish that’ll please both kids and adults. The best thing about it is that it’s so easy to make, you just pour and cook!

There is one thing you’ll need to have handy – and that’s my pre-made onion masala! This recipe is part of my onion masala series. Check out this post to learn all about it. The gist: I’m sharing recipes that call for exact amounts of onion masala to make Indian cooking easier.

The series was only supposed to be a month-long, but so many of you seem to like it, so I’m going to keep it going and share new recipes every few weeks 🙂

This is the second pasta recipe that I’m sharing in the onion masala series. I already have an Indian veggie lasagna. This dish is cheese-free and less decadent but still so good! You can, of course, always top it with cheese if you’d like.

This pasta is obviously not a traditional Indian recipe. As I mentioned in the lasagna post – this is definitely the type of thing that Indian parents make for their kids. We tend to “Indian-ify” dishes from other cuisines. I make this for my kiddo, and let me tell you – my toddler loves this pasta! He loves picking up the noodles and veggies with his little fingers. I leave in the cayenne when I make it for him, but if your kiddo isn’t used to spice, you can easily leave it out.

I can’t tell you how many times I’ve tested this recipe. It has taken me over 10 tries to get this simple dish to turn out perfectly. In fact, at one point, I announced in my Instagram stories that the recipe was coming soon – then I had to share another video to tell you guys that I changed my mind and needed to tweak it a bit more. Well, now it’s just right, and I’m thrilled to be able to share this tasty “dump and press start” recipe with you guys.

The hardest thing about developing this recipe was trying to get the proportions just right – but I did it, and you guys, it’s great! You can use regular macaroni noodles, or you can use gluten-free macaroni noodles. I have tested the dish using both types of noodles, and they cook perfectly in the same amount of time. I’ve tested this recipe using the brand Barilla so I can’t speak for other brands. Please leave a comment letting us know what you use!

Grab your onion masala and make this veggie masala pasta! 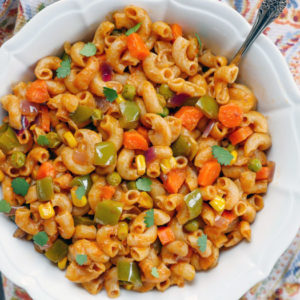