A snack that goes just as well with chai as it does a cocktail. These crispy, golden cutlets are made with ground meat, potatoes, and a blend of fragrant spices.

What is a Cutlet?

If you’re a Malayali, you know all about this crazy delicious snack. This is a really popular Keralite (Christian) recipe and is typically made with beef but you can use another type of ground meat (lamb is great!) if you’d like.

I remember the very first time I ate a Keralite cutlet. I was in my third year of college and Roby brought me some of his mom’s cutlets to try. I ate them, and they blew my mind – so much so that it’s still one of my most vivid food memories. I remember saying (in-between bites), “Whoa… this is like a Tikki… but with meat!”

I know, it’s not the most poetic description lol, but it still feels pretty accurate. Cutlets were my introduction to Keralite cuisine.

“Thank you! It turned out to be really yummy. So easy to make too. Thank you for the recipe. Will be definitely making it again.”

What’s the Difference Between a Tikki and a Cutlet?

There are some other differences between an Aloo Tikki and a meat cutlet, outside of the obvious (meat).

Another major difference is the texture. Aloo tikki calls for Yukon/yellow potatoes which are creamier than the russet potatoes used when making cutlets. Both patties melt in your mouth, but I’d say cutlets are a bit heartier.

How to Make Cutlets Easily

Cutlets are made with spiced meat and potatoes which you mash together and then form into little oblong-shaped patties. You dip them into beaten egg, roll ’em around in breadcrumbs, and then fry them.

Typically, the meat and potatoes are cooked separately… but we’re cooking them together in 6 minutes! (But like all IP recipes, that doesn’t include the time it takes to reach pressure, of course).

Then bread and fry them!

Once they’re done, you’re left with golden cutlets that are crispy on the outside with a melt-in-your-mouth middle. Kind of like french fry meets spiced ground meat. ❤️

Can I Make This in Advance?

Yes, absolutely! These taste great several days after you make them but like all fried food, it’s going to be best soon after frying. That said, they’re still awesome when you reheat them in an oven or on a pan.

If you’re serving these cutlets as a snack or as an appetizer, make sure you serve them with ketchup and pickled onions (see how to make Kerala pickled onions in the recipe card below)!

You can also make a cutlet burger – just make a large patty, stick it in a sandwich bun, and top with ketchup and pickled onions and chilies.

These cutlets would also be the perfect side to some Kerala stew (Veggie Stew or Chicken Stew). But if you do serve them as a side, just be prepared for them to steal the show. 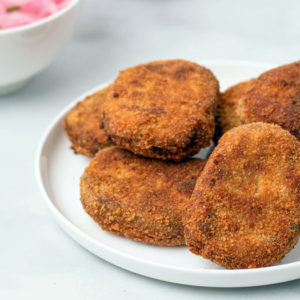 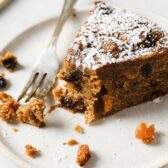