Instant pot vindaloo is a spicy and saucy pork curry full of flavor. It’s a bit tangy thanks to the vinegar in the dish, and it’s also known to be spicy (though you can, of course, adjust to taste).

The short answer: vindaloo is known as an Indian dish with Portuguese origins. The dish was brought to India by Portuguese explorers, where the recipe was adapted using local ingredients and spices.

When the Portuguese came to India during the 15th century, they colonized Goa (and up until the 1960s, Goa was actually still a Portuguese colony…). When the Portuguese arrived, they brought a dish called carne vinha d’alhos, which translates to pork cooked in garlic and wine vinegar. That dish was doctored up with Indian/Goan spices/ingredients, and the name was shortened to vindaloo.

This past summer, we took a family trip to Portugal, and the food there was very, very mild. While I didn’t get to try the original carne vinha d’alhos (pork with garlic and wine vinegar), I have to assume that it’s also a very mild dish. I can’t imagine the original Portuguese version and the Goan version have anything in common outside of the pork and garlic. The vindaloo that I’m familiar with is made with plenty of Indian spices and has quite a bit of heat.

What’s interesting is that the Portuguese are the ones who introduced chili peppers to India. Before visiting Portugal, I guess I just figured their cuisine would be spicy too, so it was surprising that that wasn’t the case.

In her book, Curry: A Tale of Cooks and Conquerors, historian Lizzie Collingham says the Portuguese likely brought the chili peppers from Brazil by way of Lisbon and then to India. And while “the Portuguese in India had developed a liking for the fiery taste of the chili pepper,” I learned that wasn’t the case for palates back home. It seems that “on the Iberian Peninsula, chilies were grown more as curious ornamental plants than as sources of a fiery flavoring.”

As for the Portuguese in India, they used chillis “in excessive quantities in vindaloo. Some recipes call for as many as 20 red chillis.” My recipe is nowhere near as spicy, though my south Indian husband would probably prefer the 20 chili version, ha.

I use cayenne chili pepper in my recipe, which is easy to adapt to taste, so make this dish as spicy as you’d like!

“This was absolutely breathtaking. Flavor, texture, everything! I trimmed all the extra fat from the pork shoulder, but there was still plenty of marbling to make it fork-tender and delicious.”

Does Vindaloo have potatoes in it?

Some people think that vindaloo should have potatoes because vindaloo contains the word ‘aloo.’ In Hindi, aloo means potatoes. The fact that ‘aloo’ is in the name is just a coincidence. This dish is all meat – no taters in here.

That said, I have an easy recipe for Instant Pot Ground Pork Vindaloo with Potatoes on my blog. The only reason I use potatoes in that recipe is to help stretch out the meal and also cut some of the heat. It’s a good weeknight option, but if you’re looking for a meaty pork vindaloo, this recipe, made with pork shoulder, is the one to try.

What to Serve with Pork Vindaloo

You can serve pork vindaloo with any Indian flatbread or Basmati Rice. Here are some more ideas: 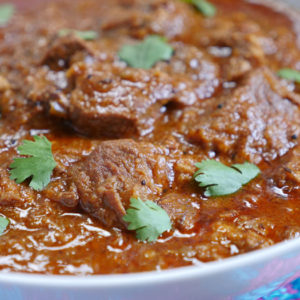 Vindaloo is known as a popular Goan curry, but it is actually of Portuguese origin. The dish was brought to India by explorers where the recipe was adapted using local ingredients and spices. This spicy curry calls for vinegar, which adds a tangy flavor to the stew. I recommend using pork shoulder in this recipe because it results in tender and juicy meat.
4.98 from 45 reviews
Pin Recipe Print Recipe
Servings 5 -6
Cuisine Indian