We are making dal dhokli today! Only, in this shortcut recipe, I’m using store-bought lasagna noodles instead of making dhoklis/dumplings from scratch (just hear me out) and it works SO well! This dal is made with mostly Indian pantry staples, perfect for a weeknight meal or on a day when you’d rather be doing anything other than standing in the kitchen.

Okay. Fair warning. This is not your mama’s dal dhokli (or your dad’s or your Gujarati family friend’s). In fact, my version might make your mama scratch her head and/or roll her eyes a bit…

But guess what! This dal dhokli is actually fantastic and approximately a billion times easier to make than the one you grew up eating. The dal itself is SO flavorful that it makes up for the lack of homemade spiced dhoklis. It’s sweet, spicy and tangy. Really. It’s good. And did I mention absurdly easy?

What do you mean lasagna noodles instead of dhoklis? Have you lost your mind (again), Ashley?

I mean, is it really that crazy? Did I sheepishly text/call several Gujarati friends/aunties asking if this was crazy? Did I go so far as to drop off this dal (and nervously await feedback) to make sure it first had their approval?

Yes (to all of the above), I’m telling you to use plain lasagna noodles instead of the spiced homemade dhoklis you’re probably used to eating if you’ve had this dal before. But I swear, it’s going to be okay. The dal has enough flavor to make up for the fact that it calls for lasagna noodles (I’ve even added some ajwain directly to the dal, since it’s missing from the dhoklis).

So no, I have not lost my mind (again), but believe me when I say y’all are about to lose your minds over this dal. It’s so much easier to make than the real deal dal dhokli and it tastes pretty darn close to the original.

Can I make this gluten-free?

How do I make this with leftover dal?

SO easily. If you’re using leftover dal just make sure you have around 4 cups of dal/liquid, add the lasagna noodles, and cook for 5 minutes at high pressure. Naturally release pressure for 5 minutes, then open the valve to release any remaining pressure. I’ve added this info to the recipe card as well.

Just a few things to know

You can adjust this dal to your preferred consistency by adding more water at the end if you prefer a thinner dal. If you prefer more dal to noodles, use 6 sheets of lasagna, but if you prefer a noodle-y dal, use 8 sheets. I (predictably) belong to the 8 sheet club. 🤓

Another difference between this dal and traditional dal dhokli is that in my shortcut version, you’ll see some dal floating around in the soup. I wanted to keep this a one-pot recipe and cook both the dal and the noodles at the same time, so you can’t really blend the dal the way you normally would. Again, this is a shortcut recipe which means there are certain minor sacrifices, though I definitely did not sacrifice flavor – if anything, I amped it up a bit to make up for anything lacking.

I am sure you will love my version of dal dhokli. Again, it’s not authentic (you know, lasagna noodles and all) but it’s easy, convenient, incredibly flavorful, and comforting. You’ll love it. And even though I’m absolutely positively certain you’ll love it, it wouldn’t hurt if you happened to leave me a comment after you try it… just confirming what I already know, of course. 😏 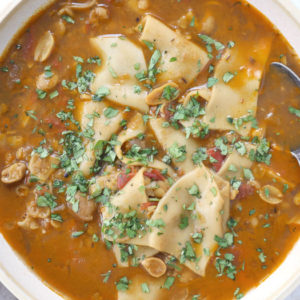 While this shortcut dal dhokli calls for lasagna noodles instead of homemade dhokli it definitely has the same essence. It’s flavorful, comforting and very easy to make.
4.94 from 16 reviews
Pin Recipe Print Recipe
Servings 4