You might be wondering how that happened. I’ll tell you (obviously). Here’s the simplified version of Mulligatawny soup’s complicated past:

Mulligatawny soup started out as an Indian recipe. Mulligatawny is actually a Tamil word that means “pepper-water.” Like the description, this dish was a very thin and spicy lentil broth typically served overtop rice. Definitely a far cry from the thick and creamy version you might be accustomed to.

When Britain ruled over India (1858-1947), the British are said to have wanted a soup. There wasn’t really a concept of a “soup” course in India before this time, so Indian cooks/servants came up with a heartier version of their “pepper-water” to satisfy them.

While my Mulligatawny soup clearly isn’t authentic, because, what is authentic Mulligatawny soup? I can tell you this… my version of Mulligatawny soup is brilliant. It’s flavorful and exciting. It’s sweet and savory and spicy and comforting and all the things that a good soup should be. It’s thickened with vegetables – not lentils – and so it’s legume-free too, though you can always add red lentils to this if you’d like.

This is one of the many delicious recipes in my eBook, South Asian Persuasion so if you’re looking for healthy paleo-friendly recipes with a lot of flavor then be sure to check it out! 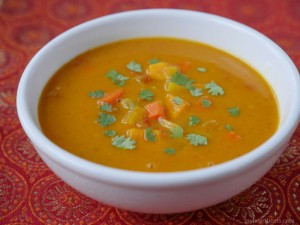