Think: creamy mushroom sauce on top of spaghetti squash strands with tasty morsels of chicken spread throughout. This Paleo chicken spaghetti is an easy weeknight dish and it’s delicious. It’s a decent amount of food too, so you’ll have plenty of leftovers. You can eat it as a casserole, or mix it all up and eat it like spaghetti.

There are a few steps to making this recipe, but they are all realllly easy. Here’s the breakdown:

You can either cook chicken or buy a rotisserie chicken. I always prefer to make my own. I suggest buying a whole chicken (fryer/broiler) and cutting it into pieces (or you can buy one that’s already pre-cut). I always try to buy local but sometimes I’ll get organic chicken from Kroger. They usually have organic griller packs which include four chicken legs and two chicken breasts. I use a combination of dark and light meat here because sometimes white meat can get a little dry. Anyway, after you rinse the chicken, put it into a pot of boiling water. You can add whatever spices you want to the water – it’ll make for a tasty chicken stock. Simmer and cook the chicken. Once its done, set it aside to cool and then remove the meat from the bones. I use three packed cups of shredded chicken meat in this chicken spaghetti recipe.

Make sure you save that chicken stock. Organic chicken broth typically costs about $4 for a four cup serving. I paid $8 for my chicken and it gave me enough meat to feed four people at least two meals AND provided about 6 cups of chicken stock. Chicken stock is delicious and good for you – and you’ll have plenty left over after making this recipe. I froze the leftover stock and made butternut squash, sweet potato and carrot soup with it. I also saved the chicken bones and put them in my freezer so that once I’ve collected enough, I can make a bone broth. I collect bones and keep them in my freezer… that’s totally weird isn’t it? Here’s my recipe for beef bone broth – if you’re making chicken bone broth follow the same directions but cook it for less time (up to 24 hours).

Now it’s time to make a creamy mushroom sauce. Oh, this is so good. In a saucepan, add oil, onions, mushrooms and a pinch of salt. Once the veggies get nice and soft, add the garlic, serrano pepper and spices. After a couple minutes, deglaze with white wine. Then add the coconut milk and chicken broth and let everything simmer until the sauce is as thick as you’d like it to be. At that point, let it cool slightly and blend it together in a food processor (or with an immersion blender).

Put it all together:

Assemble the cream sauce, chicken and squash in a casserole dish along with the tomatoes and bell pepper. Mix it all together and bake at 350 degrees for 30-40 minutes.

Enjoy this incredibly delicious chicken spaghetti on a cool fall night. It’s the ultimate comfort food made Paleo and will warm you right up. 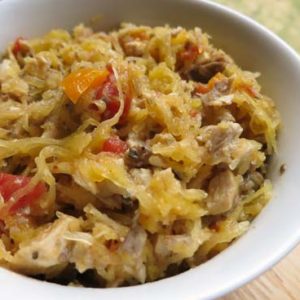 I used a 9x13 casserole dish but you can use any size, as long as it all fits! Also, I hope this goes without saying but save your chicken broth! I used 1 cup for this recipe and used the rest to make an amazing butternut squash soup.
Did you make this recipe?Tag @myheartbeets on Instagram and hashtag it #myheartbeets!