I truly didn’t think I could paleofy drunken noodles. I remember texting my friend, telling her what I was attempting and how I expected to fail. I was honestly surprised at how incredibly awesome it turned out. I made what I thought were four servings… Rob ate three servings in one sitting.

The thing about drunken noodles aka Pad Kee Mao is that for the most part, it has gluten (soy sauce) and msg (oyster sauce – most varieties). Typical drunken noodles also contain different soy sauces – one is dark soy sauce, which has a molasses like flavor to it. To replicate this flavor, I added coconut sugar which tastes similar to brown sugar.

To make this paleo drunken noodle dish, you’ll first need to create a sauce. In a bowl, add coconut sugar, coconut aminos (fermented coconut sap that tastes like soy sauce), fish sauce, lime juice and red chili pepper flakes. Let the flavors in this sauce marry while you chop your veggies. Taste the sauce and make sure you like it. Oh it’s so good.

While I’m sure you can replace the protein in this dish, I suggest trying it with shrimp first. The shrimp adds a seafood flavor which I think makes the dish taste more authentic. Perhaps it makes up for the lack of oyster sauce or whatever other fishy sauce restaurants put in their drunken noodles. If you are in the mood for some beef, I highly recommend my Thai Ground Beef Curry Recipe.

Anyway, the Thai bird’s eye chilies add that Thai hot heat that you’re used to – you can find bird’s eye chilies (phrik khi nu), at most Asian or ethnic stores. I buy these little guys in bulk and keep them in my freezer. If you can’t find them, use a serrano pepper. Don’t skimp out on the Thai basil though.  Using sweet basil won’t work – don’t do it.

You’ll need to have a spaghetti squash handy for this recipe. I used about a cup and a half in my stir-fry (half a squash). You can use the other half as a “rice” replacement – or you can save half for another recipe – like, make half of this casserole. Now, let’s be real for a second here. If you’re expecting spaghetti squash to taste anything like wide rice noodles, you’ve got another thing coming. It’s still darn good though. YUM.

I so hope you enjoy this. And, I hope it crushes any drunken noodle craving you might have. 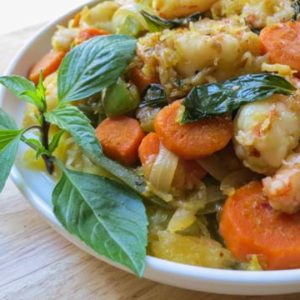