Chicken tikka masala is considered a British national dish. It’s made up of bite-sized chicken tikka served in a creamy spiced tomato gravy. This slow cooker version is both simple to make and delicious!

This flavorful slow cooker chicken tikka masala is the perfect lazy meal recipe! You just dump everything into a slow cooker and cook. Set it and forget it.

No, it’s not “authentic” – with my version, you don’t have to marinate the meat then roast it in an oven then cook it again in sauce on the stovetop. None of that. This is a super simple slow cooker version with great flavor and requiring minimal effort.

It’s a conveniently easy recipe and when recipes are convenient – this busy mama is more likely to make them more regularly!

“This was incredibly yummy. Thank you so much we all loved it. Made it with the naan bread you suggested and OMG this has to be a weekly staple in my house. Better than takeaway. I love how easy it is too, chuck it all in the slow cooker and away you go.”

What is Chicken Tikka Masala?

Chicken tikka masala is a dish where chicken tikka (chunks of roasted meat) is served in a spiced creamy tomato-based curry sauce. As I mentioned, my recipe is a simpler and easier way to make this Indian food favorite.

The funny thing is that this isn’t actually an Indian dish – it’s more of a dish made with Indian flavors. Chicken tikka masala is said to be a British creation and is actually one of the most popular dishes in the UK. There’s no official recipe for this dish – but there are plenty of people on the internet who claim there are only certain ways to make it.

What’s the Difference Between Butter Chicken and Chicken Tikka Masala?

In my opinion, chicken tikka masala is very similar to Butter Chicken. Some people will tell you one is made with more spices or without onions or with/without a certain ingredient. The fact is – there’s no one recipe for the dish or one right way to make it.

I live in the US and sometimes Indian restaurants will list both in the same line as if they’re interchangeable. Or sometimes they will list both chicken tikka masala and butter chicken on the menu – but when you ask about the difference, they’ll say it’s the same thing. Or that the sauce is the same but in the chicken tikka masala the chicken is just pieces of tandoori chicken. I’ve actually been told not to order both at the same time lol.

Serve this chicken tikka masala with Basmati Rice or Indian flatbread and a side of veggies and you’ll have a great meal that your family will be sure to love! 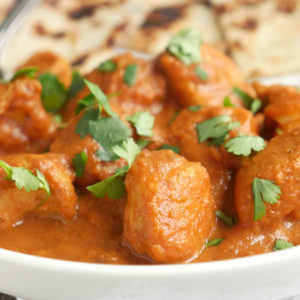