One day, Ashley’s family came to town, and she severely underestimated the number of eggs she’d need for the duration of their visit. Two days before, she had made poached eggs, and then one day earlier, she made an egg breakfast casserole. Now, her egg carton held only four measly eggs (exaggerated for the story, they were actually beautifully colored pastel pastured eggs).

The situation was bleak. How would Ashley feed SIX adults with just FOUR eggs? There was no way. Most would call the idea: impossible.

Her mission, should she choose to accept it: to make a delicious breakfast skillet without running to the grocery store for more eggs. Because it was already breakfast time, and there was not a second to spare.

The family would be coming down the stairs one by one any minute now. Thankfully, her mother came down first and took Ashley’s baby, “Tony The Adorable,” to the living room to play with him. Ashley raced to the kitchen.

Could she do it? The clock was working against her. Tick tock. Tick tock. She had at most half an hour before the rest of her family came down the stairs.

She turned on the stove, put a large pat of butter onto her weapon of choice: a beautiful large all-clad stainless steel pan that she got as a gift two Christmases ago from her in-laws (different from the cast iron skillet pictured here… this one looked better in photos!). She scrambled the four eggs in butter, then put the eggs in a bowl and placed them in the oven so they’d keep warm. Then she added diced potatoes and a few other things to the skillet (see directions below), along with lots of paprika and garlic powder. Once the potatoes were cooked through, she added the eggs to the skillet along with a couple of slices of grass-fed cheddar cheese which melted immediately when placed on top of the steaming potatoes. It was like a scene straight out of a commercial.

Ashley knew that this skillet was delicious. But delicious wasn’t good enough for her. She needed it to be the ULTIMATE in deliciousness, which is the highest level of deliciousness that a person can achieve. She topped the skillet with cool, creamy avocado and the ripest of cherry tomatoes. She sprinkled some sliced green onion and cilantro on top and then served it to her visiting family right away.

The six of them ate the meal, and they LOVED it. Even her dad, who keeps it real and tells her what he really thinks of a recipe, said he loved it. This skillet was a winner.

Everyone was happy and satisfied, but Ashley kind of wished there were seconds/thirds, so she recommends serving the skillet with one other thing, perhaps (gluten-free) toast.

Now dear reader, this impossibly easy task is yours to follow. It’s easy because Ashley already did the hard work that was developing the recipe. As always, should you mess up this recipe by substituting ingredients willy nilly, Ashley will disavow any knowledge of your actions. In other words, don’t blame her.

(Does anyone get these mission impossible references? Or am I in my own world here? Whatever. Enjoy the recipe y’all!). 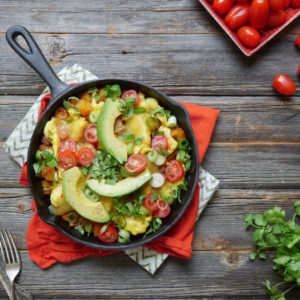