Once upon a time, a girl named Ashley bought a big bunch of organic bananas from Costco for $1.99.  She had so many ideas on what to do with them, but she was lazy and they ended up ripening on the table. Ashley was picky and refused to eat ripe bananas. She preferred them when they were green. She didn’t want to  bake with the bananas either. So they sat there alone on the counter, continuing to develop brown spots.

The situation was very bleak. It looked like there was no choice other than to send the bananas to freezer camp.

Suddenly, one day after dinner – out of absolutely nowhere – Ashley’s Prince Charming (Roby aka Mr. Heart Beet), decided he wanted dessert. Ashley was trying not to eat any sugar (because she ate an entire coffee cake the week before) so she decided to sweeten the dessert with the overly ripe bananas. She mashed them and mashed them and then put them in a dutch oven along with some full-fat coconut milk. She stood over the pot and tirelessly stirred the mixture for what seemed like forever but was really only like 10 minutes. Little did she know that her minimal amount of effort would be worth it.

When the dish was done, Ashley realized that she had created a breakfast/dessert/snack without using ANY sugar. The Banana Nut N’oatmeal was so perfectly sweet. And to her surprise, the aroma of the cardamom and nutmeg brought her Prince Charming to the kitchen, something that had never happened before (her Prince Charming avoided the kitchen out of fear of the evil dishwasher… having to turn it on would be far too scary for him, lol).

The two of them – Prince Charming and Princess Ashley – sat on the couch with a big bowl of Paleo N’Oatmeal and watched a great movie on Netflix called Hector and the Search for Happiness. Even before finishing the movie, the two lovebirds figured out the key to their happiness. An empty bowl, a happy belly and a full heart. 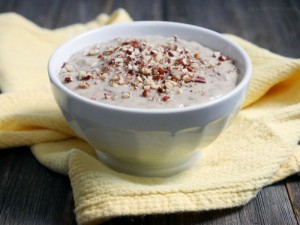