OH the tomatoes in this dish! They were like bits of sweet soft candy in my spicy egg frittata. I’m telling you, they were amazing. I’m more of a sweet and spicy vs. sweet and sour kind of girl. Just thinking about the first combination makes my mouth water a little bit. This frittata was sweet, spicy, savory, and salty. The crumbled bacon was the icing on my little egg pie.

I prefer recipes that require less cleaning because well, who doesn’t? With this recipe, you only need a bowl and a cast iron skillet (I used an 8-inch).

I definitely suggest using a cast iron skillet for this recipe, because you can pop your skillet in the oven for a few minutes to cook up the top layer of egg. Again, mine is an 8-inch skillet and my 5 eggs filled it to the top, but if yours is larger just up the ingredients. If you’re new to cast iron cooking, be sure to season your skillet so that it’s nonstick. The last thing you want is egg stuck on your skillet – although if you’re using bacon fat, it should slide right out. 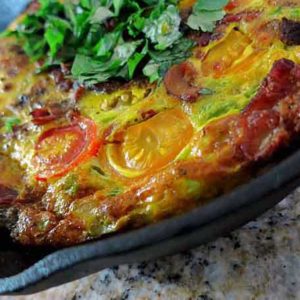