check out my recipe index → 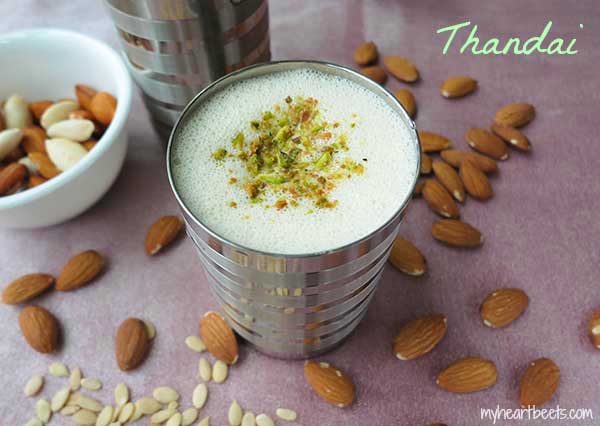 Thandai (also known as Sardai) is a creamy cold drink made with nuts and spices. It’s a MUST have treat for Holi – an Indian festival welcoming spring. Holi is also known as the festival of colors (it’s the one where people throw colorful powder on each other – see the video below). Thandai translates to “something that cools” and once you get a taste, you’ll definitely want more of this sweet, nutty drink. 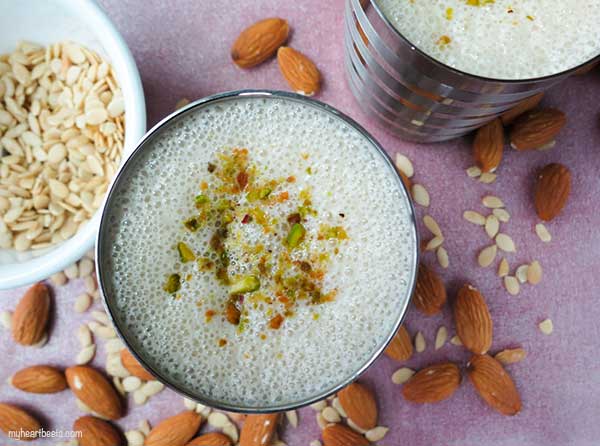 In India, it’s very common to make Thandai with bhang aka marijuana (it’s government regulated). There’s no bhang in my recipe but if you drink, you can add a little rum to this if you’d like.

So, I’ve seen enough bollywood films in my day to know that some people drink bhang ki thandai (the kind with marijuana) on Holi as an intoxicant, but there are actually some folks in India who use bhang for ayurvedic purposes or drink bhang ki thandai for meditation/prayer. It’s SO common there that my mom tried it when she was young – and had no idea that it was considered an intoxicant. It’s really too bad that I didn’t have this information when I was a kid. I probably could have gotten away with much more 😉

This drink is made with soaked almonds, white poppy seeds, black peppercorns, cardamom, fennel seeds and melon seeds (char magaz). Melon seeds might be a new one for you. In India, some people eat melon seeds the way many of us eat sunflower seeds. It’s kind of tricky getting the kernels out of melon seeds – since they’re small – but you can do it with tweezers. If you don’t want to go through the trouble, you can find melon kernels at your local Indian grocery store or on Amazon. They’re labeled as char magaz (pumpkin seeds), but they’re not actually pumpkin seeds – which I realize is kinda confusing. Char magaz means four different types of seeds and so the package is actually a combination of different melons, but cantaloupe kernels will work just fine. If you want to leave the seeds out completely… that’s also fine. 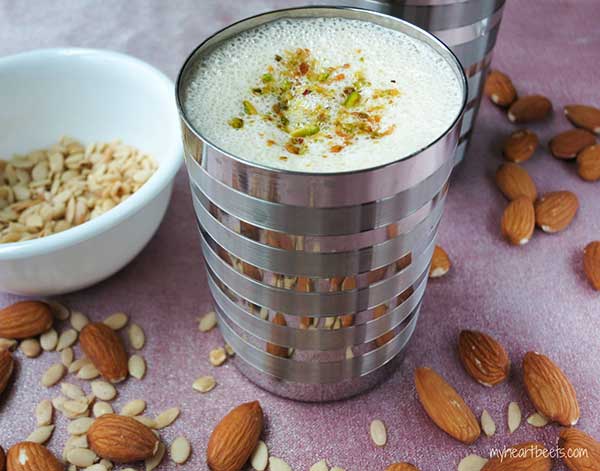 Ok one last thing… want to see people playing Holi? At 4:25 you can see Shah Rukh Khan give another actor some bhang ki thandai – as liquid courage so he can woo the girl he’s trying to get with. The other actor actually looks pretty creepy…

Make this on Holi or whenever & enjoy!

For the melon seeds – wash and dry cantaloupe seeds. After a day or two, break the seeds open with tweezers/fingers and use the kernels in this thandai recipe. If you don’t want to do this, you can buy them already shelled or just leave this out.