GUEST POST: Angela from Paleo Kitchen Lab is here sharing her recipe for delicious banana yuca waffles topped with a simple jam made from dried fruits. Angela, a grain-free food blogger, made the switch to Paleo after being diagnosed with IBS and has used her diet to help heal her gut. You can read more about her story here. Here’s Angela:

I have a confession to make. I’m a bit obsessed with yuca.

Since discovering this miracle tuber (similar to a potato but more versatile), I’ve made things I never dreamed I could eat on the Paleo diet: dinner rolls, pie crust, empanadas, focaccia, sweet breakfast bread, English muffins and pizza crust.

Yuca is the starchy root vegetable that tapioca starch/flour comes from. If you’ve ever baked with tapioca you know how sticky and chewy it is. Because it has natural binding properties, there’s no need to use eggs. Amazing.

I learned about tapioca by making Ashley’s insanely yummy Paleo Naan Bread. And tapioca was my gateway to yuca. After discovering the world’s most versatile veggie, my imagination took over. I began experimenting with yuca like crazy.

Today, I’m thrilled to share one of my favorite yuca recipes. These waffles are soft and chewy yet also crispy and caramelized around the edges. They were sweet enough to eat plain but were even better with butter and a dried fruit jam. The difference between yuca and tapioca

Yuca is a whole food containing carbs, protein and fat while tapioca is just the starch/carbohydrate extracted from yuca (fat and protein are removed).

Yuca (also known as manioc or cassava) needs to be carefully peeled, boiled and mashed to create a dough. Mix it with a little bit of oil and you can bake anything your heart desires. Here’s a video on how to prepare yuca dough.

Yuca freezes well, so make a big batch so you can have some on hand for later.

Getting the right batter texture

Your batter shouldn’t be too dense. You should be able to pour it onto a waffle iron like regular waffle batter. If you can’t pour it, add water, oil or coconut milk one tablespoon at a time until the batter is pourable.

If your dough is too thin, add tapioca, arrowroot or coconut flour one tablespoon at a time until you’ve thickened the batter.

Ideas for other sweet things to add to your waffle batter as you’re experimenting: spices like vanilla, cinnamon, cardamom or pumpkin pie spice.  Or berries, pistachios, chocolate chips, coconut butter or nut butter.

Or go savory: replace bananas with garlic salt and serve a savory waffle with Paleo fried chicken and yuca fries.

Where to buy yuca?

Yuca is available canned, frozen or fresh at Asian or Latin supermarkets. And Amazon sells it too!

I hope this miracle tuber creates as much possibility in your kitchen as it has in mine. Have fun playing with yuca!

No waffle iron? No problem.

No yuca? No problem.

If getting yuca is a challenge you can substitute tapioca flour for this recipe. It will differ a bit in taste and texture. See the version using tapioca flour below. 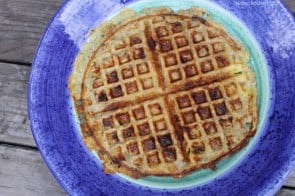 You may need to pour less batter into the waffle iron depending on its size. You want to keep these waffles thin, so that they cook through properly.
Did you make this recipe?Tag @myheartbeets on Instagram and hashtag it #myheartbeets! Many years ago, Angela Privin was diagnosed with Irritable Bowel Syndrome and told she’d live with it forever. After much trial and error, she used the Paleo diet to heal her gut and reverse her food allergies. Since then, Angela has used Paleo to heal her dog of a yeast infection and her husband of leaky gut. She now blogs about her food adventures at www.paleokitchenlab.com