With the Chinese New Year coming up at the end of the month, I figured this would be the perfect time to post this Cantonese Ham and Lotus Root Soup recipe. You only need four ingredients to make this delicious soup.

A good Cantonese soup has a clear broth, few ingredients and is cooked low and slow. See how clear the broth is in my picture? Yep, I did it right.

So, I’m not Chinese nor do I celebrate the Chinese New Year (hey, maybe I will this year…) but I love trying recipes from different parts of the world. My godmom, Mailan, is Chinese and this is a recipe she gave me – so, you can trust that it’s authentic. I love all of Mailan’s cooking and ask her for advice all the time (did you see the tip she gave me in my bone broth recipe?). She lived in France for awhile and is also an amazing French cook. Here’s a picture of Mailan, me and my mom at my Hollywood themed bridal shower.

I used to love ham bean soup, especially this time of year. For those following a paleo diet, legumes are out of the question. So, I asked Mailan what I could make that would be just as tasty and filling – and she suggested this ham and lotus root soup.

The ingredients list is very short, but the broth is incredibly flavorful and comforting. To make this soup, you just need water, a ham bone, lotus root and some jujube dates (red dates – can find in any Asian grocery store). You can also add pig feet for more flavor and collagen.

For those of you who have never used lotus root before – it’s the rhizome of the lotus flower plant. It’s texture and flavor is very similar to that of a water chestnut. The coolest thing about the lotus root is that even after 8 hours of cooking, it’s still crunchy. Lotus root is commonly used in Indian dishes as well (I love it stir-fried – will have to share a recipe at some point). After you peel and slice the root, soak it in water and rinse a few times to make sure you’ve removed any dirt. When cleaned and sliced, it’s really very pretty.

I think this soup is delicious as is, but you can always add other spices at the end if you’d like. Enjoy sipping on this soup. I hope you’re amazed at how just a few ingredients can make something so very flavorful. 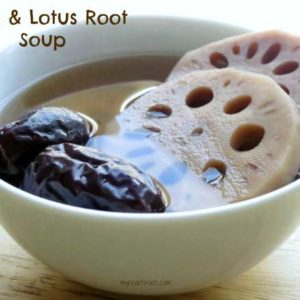 Before serving, you can strain the soup through a mesh strainer and then add the lotus root and ham pieces to the bowl. This makes for a clearer broth.
Did you make this recipe?Tag @myheartbeets on Instagram and hashtag it #myheartbeets!