This is the most comforting soup: chicken pot pie served in a bowl!

Chicken pot pie soup is rich, creamy, and full of flavor. It’s the perfect soup for fall, for rainy days, cold weather, for sniffles/flu season, and pretty much any time you want a big bowl of comfort.

The best part about this paleo-friendly recipe is that no one will know it’s healthy unless you tell them. That’s because this soup tastes just like traditional chicken pot pie filling. Actually, let me rephrase that – it’s WAY better.

The seasonings in this soup are spot on. I’m talking fresh fall herbs: sage, rosemary, thyme. There’s cayenne for a slight kick. And unlike other dairy-free chicken pot pie recipes, THIS soup is extremely thick and hearty.

Now that I’ve appropriately hyped up this recipe, I really hope you make it. I don’t oversell when it comes to recipes – I say it like it is. For example, with my popular paleo naan recipe – I’ve been very clear in saying that while it’s delicious, it’s NOT like traditional naan. But when it comes to recipes that ARE as good if not better than their original counterparts, I basically shout it from the rooftops. My beef stroganoff and my cream of mushroom soup for example – I’d put those two up against traditional recipes any day. The same goes for this chicken pot pie soup:

My picky husband loves this soup and he is how I measure whether a recipe will be enjoyable for “junk-food loving people.” Granted these days he eats pretty healthy (mainly because he’s too busy to pick up fast food and has to eat what I make him). If he loves it, there’s a good chance the picky eater(s) in your life will love it too.

And trust me, you won’t miss the bready crust that typically accompanies chicken pot pie. That said, if you do want something bready, make a batch of my paleo naan and crisp it up in the oven. You can also make or buy a gluten-free crust and use this thick soup as a filling. OR you can try my paleo chicken pot pie casserole.

You can make this soup for dinner one day, and use the leftovers to make my paleo casserole the next day. Your family will LOVE this. I’m already so excited for you to make it! 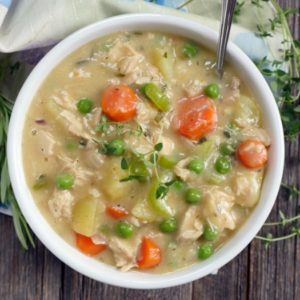 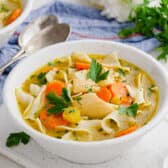