Fall is my favorite food season! I love spending time in the kitchen cooking up hearty meals. I love that I don’t have to worry about the oven heating up the house – in fact, that’s a bonus for this time of year. And most of all, I love the way fall food warms you up from the inside out. This Paleo Chicken Pot Pie Casserole will do exactly that.

The filling is really rich, thick, creamy and flavorful. And the easy-to-make 3-ingredient gluten-free casserole crust is golden, flaky and crispy when baked.

There’s no need to roll pie dough or anything like that. Just make a batch of my 3-ingredient flatbread (also known as Paleo Naan) and layer them on top of the casserole.

In the photo below, you can see that I cut a few pieces of flatbread in half to better cover my casserole dish.

As the dish bakes in the oven, the bottom of the bread will stay soft, but the top will become nice and crisp! The longer you bake it, the crispier and flakier the crust will become – just keep an eye on it to make sure it doesn’t burn. See how the pot pie filling practically bubbles overtop of the crust?! SO GOOD.

This “recipe” is really more of an “assembly.” There are two steps to it:

I tend to prefer my coconut flour flatbread but either naan works!

Once you do those two things, just assemble the casserole! I can’t wait to hear what you think of the recipe 🙂 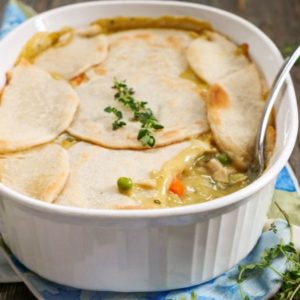