This gluten-free samosa is delicious and so simple to make! The dough is made with almond flour and tapioca flour and the filling is a traditional mixture of spiced potatoes and peas. I also have a nut-free option too!

How to Make Gluten-Free Samosas

These gluten-free samosas are so easy to make. In fact, they’re easier to make than regular samosas. I must warn you, this recipe seems too good to be true, but it is in fact, amazing.

I use my recipe for 3-ingredient Gluten-Free Naan (or you can use my Coconut Flour Naan if nut-free) to make the samosa base.

To make the samosas, first, make the naan batter by combining:

Then pour the batter onto a pan, as if you were making pancakes. Make 2-3 naans (depending on how large you want your samosas). Let the naan cook long enough so that you can easily move the flatbread from a pan onto a baking sheet. The bread will still look a little raw, but don’t worry – it will crisp up in the oven.

Once you have the naan on a baking sheet, cut it in half. Then add a spoonful of your filling in the middle.

Next, fold one side of your bread over the filling and then fold the other flap – creating a triangle. Pinch the bottom closed.

You can use egg wash to help keep the edges sealed; I also suggest brushing egg wash on top to help you achieve a golden crust. If you don’t eat eggs, use ghee or oil instead. Bake the samosas for 30-40 minutes or until crispy.

“I have made these many many times now and thought I should thank you for this amazing recipe!

My daughter thought she could never eat samosas again since being diagnosed with Ulcerative Colitis and Celiac disease.

They are absolutely delicious!”

“I don’t know what to say except that Ashley is a shero in my house.

I made the potato filling the day before and refrigerated. The next day, I made the shells/crepes and filled them. I brushed a little ghee on the top and bottom and baked until they were lightly golden.

I fed them to my mom, who would never have known that they were gluten free, let alone grain free. We have sorely missed samosas for years due to going gluten free. These are AMAZING. They’re still amazing the next day reheated as well. They are worth every minute of work. Thank you so much for this recipe, we are all so grateful to enjoy samosas again.”

Add whatever filling you’d like to these lovely samosas. If you prefer meat – then use my Ground Meat Samosa Filling.

Eat these gluten-free samosas with my sweet and spicy Green Chutney and tangy Tamarind Chutney while sipping on some Masala Chai. Enjoy!

Want more gluten-free Indian recipes? All of the recipes on my blog are gluten-free. You can also check out my Paleo Indian eCookbook: South Asian Persuasion! It has 100+ Paleo Indian Recipes, many of which you won’t find anywhere else (pakoras, vadas, paneer, chaat, and lots more)! 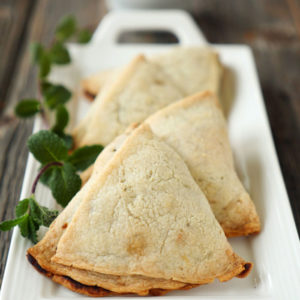 Just for fun, here is a picture of this recipe from 2013: