When I was a kid, I HATED turmeric milk, also known as haldi ka doodh. In my six-year-old mind, there was nothing “golden” about golden milk. I treated it like medicine, because that’s how my parents gave it to me. If I had a minor cold or a tummy ache, then you can bet my mom or dad were making me a cup of turmeric milk.

Fast forward to my twenties (ack, now 30s…) and I’m a golden milk believer. I drink it warm in the winter and I even make concentrated golden milk gummies to help keep colds at bay. In the summer though, I’m all about icy golden milk popsicles. ☀️

These golden milk popsicles are sweet, icy and the perfect treat during this summer heat. If you have kiddos, these treats are a great way to get them to give golden milk a try. Just start off with less turmeric and work your way up – turmeric is an acquired taste. Another thing to keep in mind when serving this to kids (or messy adults), make sure they’re wearing a bib/old clothes! Turmeric stains are the worst. In India and well, now here in the states, golden milk is a known ancient healing remedy. It has anti-inflammatory properties; research shows that curcumin, the active ingredient in turmeric, has many health benefits (source – one of many).

As you make these popsicles, you’ll notice that the golden color gets darker the longer you cook the turmeric in the milk. In addition to turmeric, I added other spices like: ginger, cinnamon, cardamom and black pepper. I added the black pepper because it helps the body absorb the curcumin (source).

You can see these golden milk ice pops are a treat that you can feel good about eating this summer! 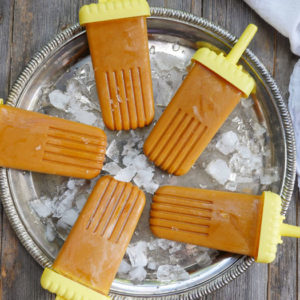