What is Golden Milk?

In India and well, now here in the states, golden milk is a known ancient healing remedy.

Haldi ka doodh is a drink my parents gave me as a child whenever I was feeling a bit under the weather. In my six-year-old mind, there was nothing “golden” about golden milk. I considered it medicine, because that’s how my parents gave it to me. If I had a minor cold or a tummy ache, then you can bet my mom or dad were making me a cup of turmeric milk.

As an adult, I’m a golden milk believer – I enjoy sipping on a hot cup of turmeric tea during the cooler months. During the hotter months, I’ll get my golden fix in the form of concentrated golden milk gummies or icy golden milk popsicles. If you have a picky husband (like I do) or picky kid(s) give the golden gummies or ice pops a try!

Turmeric has become a popular “superfood” in the US and is the key ingredient in golden milk. In addition to turmeric, I add other spices to the tea like: ginger, cardamom and black pepper. I add black pepper because it helps the body absorb the curcumin (source). Sometimes I’ll add cinnamon too – totally up to you. Adapt this milky tea to your taste!

The spice cabinet is a pretty common go-to in Indian households when it comes to treating minor illnesses. And as I’ve mentioned, turmeric milk is considered an Indian healing remedy.

I’m not here to convince you that turmeric is some magic cure-all but research does show that curcumin, the active ingredient in turmeric, has many health benefits (source – one of many). It’s touted as having anti-inflammatory properties as well as the potential to help prevent heart disease, alzheimer’s, cancer, etc. Who knows if turmeric can actually help – I don’t think there’s much of a downside/con to increasing the spice in your diet though – especially if you’re using good quality organic turmeric.

I’m not a doctor or any sort of health professional – I just like to cook and share recipes online. I think that maybe because of my upbringing I tend to try and seek out more natural cures for minor illnesses (I have a tasty besan ka sheera for colds if you want to give that a try). I am definitely NOT some blogger who is going to tell you to ditch medicine for golden milk lol. But hey, it doesn’t hurt to try it out – right? If anything, maybe you’ll just enjoy the flavor and the feeling that comes with sitting down to sip on this hot creamy spiced drink.

I hope you make and enjoy this honey sweetened, turmeric spiced milky tea! Let me know what you think of it! 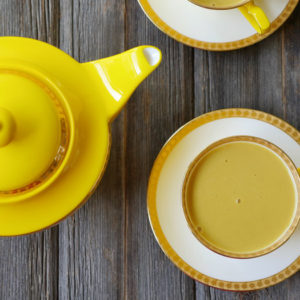 Golden Milk, also known as haldi ka doodh, is an ancient healing remedy commonly used in India to treat colds or other illnesses. I usually use turmeric powder to make this hot drink because it’s convenient, but if you can find fresh turmeric, use that instead. Just be careful while making this, turmeric stains easily.
5 from 3 reviews
Pin Recipe Print Recipe
Cuisine Indian