I never (ever) thought I’d say this but… I think I’m addicted to brussels sprouts.

They’re the star of this skillet… see them glistening in all their sprouty glory? Ok, they’re actually glistening because I cooked them in coconut oil, but I suppose that’s neither here nor there. Or maybe it is here and there…

Let me introduce you to the rest of my friends – the other players in this skillet game: ground turkey, red bell pepper, and a blend of spices. Then there are brussels, who you know. Obviously.

On their own, these players are pretty chill. But together, they make for an awesome team. Like, so good I’d put them in my bracket. Oh wait, brackets are for basketball, right? Wrong season, wrong sport… I should probably stop using sports analogies when talking about food (but I won’t).

When it comes to sports, all I really care about is what I’m serving during what game. I love cooking for football games. I hate actually having to watch the game…

But, if I was rooting for a team, it’d be… TEAM BRUSSELS SPROUTS.

I’m pretty sure people would be overall happier if we rooted for food instead of sports. I feel like sports just make people stress out? Hm, I just thought of this… if I could root for any food, I’d root for roots! Just so I could say I was rooting for roots. Goooo Beets!

I should probably stop writing these blog posts at 1am…

Make this skillet for breakfast, lunch, or dinner. Or for brunch or brinner. Basically, anytime because this skillet is delicious. It’ll score you points with friends and family. 😉 Maybe put a fried egg on top for a slam dunk… er, touchdown. 😉 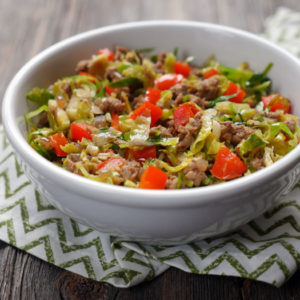