This habanero chili is crazy spicy, but it’s also delicious. If you don’t like habaneros, you don’t have to use them – this chili will still be good. Maybe try a jalapeno instead! The great thing about this recipe is that it’s so simple to make; brown some meat and put it in your crock pot along with a few other ingredients. A few hours later, you’ll have a steaming bowl of incredible paleo chili. Sprinkle some crumbled bacon on top for good measure and devour.

I made this habanero chili before leaving for NYC this past weekend. I wanted to make sure Roby (my husband) didn’t eat fast food while I was out of town. I swear he gets excited when he knows I’m leaving – his mind goes straight to chicken nuggets. The reason I traveled to NYC was because my college best friend’s boyfriend asked me to visit. He was planning to propose to her and wanted her close friends to be there to celebrate afterward. We surprised her at a bar in the city – it was amazing – I’ve never seen her so happy! It was such an awesome night.

While I was in NYC, I stayed with my younger brother, Rishi. He took me all around the city – including to the farmer’s market in Union Square. Let me tell you, that market is amazing. We drank freshly pressed apple cider and ate maple candy. I bought fresh cranberries, six pounds of pears and honey. You’ll probably see these things make an appearance on my blog next week. Oh, he also took me to the best macaron shop in the city (gluten-free macarons for the win!).

When I returned home, the habanero chili was gone. Apparently Roby ate all of the chili in one day – he said it was the best chili I’ve ever made. I had a bowl before I left and it really was good. The habanero pepper adds such a unique flavor – once you get past the insanely hot part. I like this chili with one habanero but Roby likes it with two. However many of these peppers you can handle – one thing is certain – this spicy chili will keep you nice and warm in this chilly weather. (See what I did there… chili and chilly? I just want to make sure you noticed my clever pun). 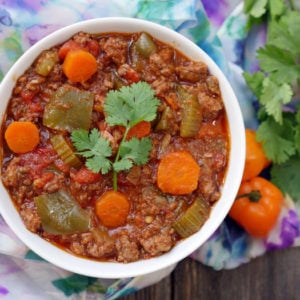 Just for fun, here’s my original picture of this chili from 2013: 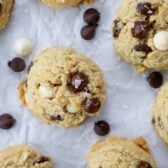