These potatoes are slightly spicy with big dill flavor. Pan-fry them until they’re golden brown, then toss in as much fresh dill as you want (I used a big handful). You can eat these potatoes as a side dish or add in some sausage to make a tasty breakfast hash.

A lot of people assume that Indian food is difficult to make. I promise  you… cooking Indian food is NO BIG DILL. Oh, I meant to say deal. It’s no big deal. Alright, I guess I’m not fooling anyone. You know I’ve been dying to say that.

Really though, these fried potatoes are so simple to make. You need cumin seeds, turmeric and Kashmiri chili powder. Kashmiri chili is a mild chili – I like to describe it as being similar to a combination of paprika and cayenne. It’s adds a slightly spicy flavor and when combined with turmeric, it creates a pretty orange color.

This dish is actually called Aloo Suva in Hindi or Aloo Soya in Punjabi – those both literally translate to “Potato Dill.” You can also make this same dish with fresh fenugreek leaves (also known as kasoori methi leaves). You can sometimes find fresh methi leaves at an Indian grocery store. I decided to use dill because I bought a big bunch at the farmer’s market. I’m glad I did too because I just love the fresh and tangy flavor it adds to these potatoes. I think I’m going to try adding dill to my potato pakora recipe next! 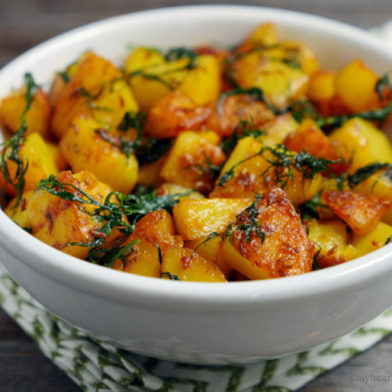