A rich, creamy dessert that’ll melt-in-your-mouth! This cardamom-spiced milk cake is the perfect treat for this festive time of year.

Kalakand, also known as milk cake, is a popular Indian dessert. It’s a sweet that I think most people prefer to buy in stores, because of how long it takes to make.

Well, I’ve come up with a shortcut kalakand recipe that doesn’t sacrifice flavor. This recipe tastes just like store-bought mithai!

You should know that I’m somewhat of a kalakand expert. No one has officially bestowed that title on me, but it’s true. What makes me an expert? Well, I have decades of experience eating kalakand lol. I’ve been eating it (according to my mother, more like demanding it) since the approximate age of 3. Back then, I called it “milk mithai.” I still think that’s a nice name for this dessert.

As a teenager, I dreamt of opening my own mithai shop (I also had several other unlikely career aspirations, like being a comedian, which is hilarious because I am not funny, though I try lol). I had plans to call my mithai shop Ashley’s mithai shop (not very creative, I know).

Now, I’m a grown-up (more or less), and even though I don’t have my own mithai shop, I’m pretty sure that if I did, this kalakand would be a best-seller. Right ahead of or alongside my kaju katli, moong dal halwa, and besan burfi.

What is Kalakand (milk cake)?

If you’ve never tried kalakand, it tastes kind of like a mix between a cake and soft fudge. It’s sort of like Indian tres leches. Think a soft, and moist yet still firm cake that’s slightly crumbly and melts in your mouth. I think it might be impossible for me to describe this dessert in a way that does it justice.

Kalakand is said to have originated in Alwar, a city in Rajasthan. The story is that a dessert maker left Pakistan after the Partition in 1947 and settled in Alwar, where he brought this dessert and made it popular. Different varieties of milk cakes were already popular in Punjab; it could be that kalakand was an adaptation of those other variations.

There are different varieties of milk cake. This dessert can vary in color; some are white, some are brown, and some are ombré. It all depends on the cooking method and the type of ingredients used. Some recipes use whole milk, some call for paneer, and some use condensed milk. My shortcut version calls for ricotta cheese.

Traditionally though, this dessert is made by reducing milk and sugar until it forms a crumbly, soft burfi (fudge). It normally takes forever to make. You’re supposed to watch a pot of milk boil until it reduces to basically nothing.

We are skipping that step entirely. My method requires minimal effort and little hands-on time.

How to make Kalakand in an Instant Pot:

Pour it into a pan, garnish with pistachios and chill for 3 hours.

As someone who has eaten more than her fair share of kalakand over the years, I’m confident in declaring that this is the best kalakand I’ve ever had. Or at least, equally as good as the best I’ve ever had. I can’t wait to hear what you think! 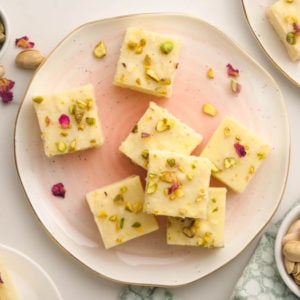 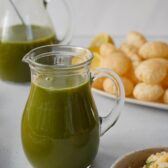