You can now make moong dal halwa, a rich and sweet Indian dessert, easily in an instant pot! I’m sharing my super quick shortcut method to making this decadent dessert!

Yes, I’m talking about the same dal halwa that traditionally takes ages to make on the stovetop. That same perfectly sweet, ghee-soaked halwa that always makes an appearance during festivals, weddings, special occasions.

Moong dal halwa is known for its labor-intensive process. Traditionally, you have to soak dal overnight and grind it and then stir, stir, stir the raw lentils until cooked. Nope. Not anymore. Thank you, next.

In true millennial fashion, I’ve found a lazier (smarter?) way to make this sweet dish. There’s NO grinding. NO stirring raw dal until cooked (but I mean, there is still some stirring involved because c’mon despite what I’ve said in the past, I’m not actually a wizard… maybe just a magician). 🧙🏾‍♀️

What is Moong Dal Halwa?

If you’re not familiar with this dessert, it’s made with these petite yellow lentils, called moong dal:

This dal, when combined with a bit of cardamom, some sugar and a lot of ghee, turns into… the most amazing halwa.

We’re going to pressure cook this dal! Like the little lentils – forget grinding them – you’ll still get that silky smooth, melt-in-your-mouth texture. I was about to write the “same mouthfeel” but I had promised myself years ago that I’d never use that word. Sharing that with you just now doesn’t count…

How To Make Halwa Moong Dal?

Add sugar and ghee and stir! That’s it!

I’ve been working on this recipe with my parents for months now and it’s because of them that I’m sharing it here on the blog. My mom is a genius in the kitchen (have you tried her Meethe Chawal yet?!) and they’ve tasted and tested this for me – with my dad offering his usual helpful feedback like “too much cardamom, not enough ghee, needs more cook time” lol – so really, you have them to thank for this perfectly easy and delicious halwa. Also, my dad is definitely the reason there is so much ghee in this recipe – according to him, “if you’re going to make halwa, it should be made right.” 😂 If you haven’t tried the Carrot Halwa that he helped me with, you must.

I know I talk about family a lot on the blog but honestly, it’s because of them (parents, in-laws, family friends) that this little blog of mine exists. After all, without them, I’d have no idea how to cook or what awesome food is supposed to taste like.

And I can say with absolute certainty that this dal halwa is awesome.

How long does Moong Dal Halwa last for?

I suggest eating this halwa within a week of making it – I’m not sure it’ll last you that long though!

Okay, now I’m really excited for you to make this dal halwa. Tell me what you think – I’ll just be here waiting! 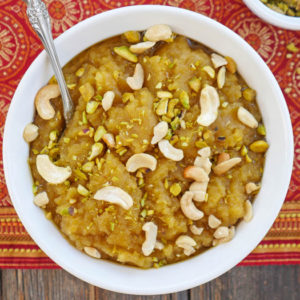 This instant pot moong dal halwa is so much easier to make than the traditional stovetop version. With my recipe, you don’t have to grind the dal and there is far less stirring required. This is the easiest way to make this rich and decadent halwa!
5 from 39 reviews
Pin Recipe Print Recipe
Servings 6
Cuisine Indian 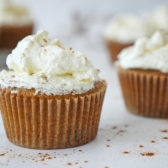 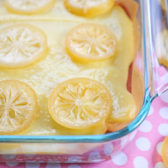