This perfectly cooked lamb will melt in your mouth! Rogan Josh is a popular mild curry that is easy to make in an instant pot. The meat is cooked in an onion and yogurt gravy, making it both flavorful and tender.

Don’t let the fiery red color of this dish mislead you.

Rogan josh is actually a mild curry that isn’t meant to be spicy. It’s so mild that I introduced this curry to my baby Tony even before he turned one. It’s very flavorful, but there’s very little heat to it.

In the United States (and perhaps the UK too?), I’d say rogan josh is slightly less popular than butter chicken and about equally as popular as vindaloo. You can typically find both rogan josh and vindaloo on nearly every Indian restaurant menu. Just be sure not to mix the two when ordering, as vindaloo has a reputation for being very spicy!

A Kashmiri dish with Persian origins

Rogan Josh is a popular Kashmiri dish with Persian origins. So how did a Persian dish become an Indian (Kashmiri) one? Historian Lizzie Collingham writes in her book, Curry: A Tale of Cooks and Conquerors, that during India’s Mughal empire, the Mughals, who were heavily influenced by Persians, would travel to the mountains of Kashmir to escape the heat. It was during their time there that they developed this dish.

According to Collingham, the ingredients of this dish changed depending on the cook’s religion. She writes, “Kashmiri Brahman’s are unusual in that they eat meat without any qualms, but they do avoid onions and garlic,” whereas a Muslim version would call for plenty of garlic and onion. She also writes that a dried flower native to Kashmir gave the dish a bright red color. These days, I think most use either Kashmiri chili powder (and perhaps tomatoes) to achieve this dish’s signature red color.

My rogan josh recipe is similar to one you might find at a restaurant (though I’m biased and think my version is better). It calls for onions and garlic, and a handful of other ingredients.

Serve this rich and flavorful lamb rogan josh with basmati rice or matar pulao and a vegetable side like aloo beans or aloo methi. Meat, rice, and potatoes. A perfect meal. 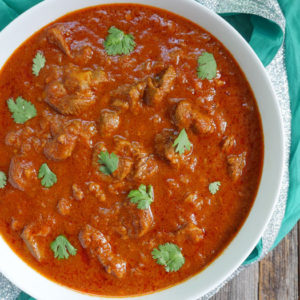 This perfectly cooked lamb will melt in your mouth! The meat is cooked in an onion and yogurt gravy, making it both flavorful and tender. Rogan Josh, a popular Kashmiri dish with Persian origins, is a mild curry that isn’t meant to be spicy. The signature red color of this curry comes from the use of Kashmiri chili peppers, which are very mild and taste similar to paprika. If you want to substitute Kashmiri chili powder for the paprika, feel free to do so.
4.82 from 16 reviews
Pin Recipe Print Recipe