Whenever I plan a menu for a get-together (gosh, I miss those), the first thing I think about is what vegetarian main dish to serve. I always have a couple of options, but there has to be one recipe on the table that stands out, a dish worthy of a special occasion.

In the past, vegetable korma or veg biryani have served as my go-to vegetarian entertaining recipes, but today, I’m sharing a dish that, while not quite as popular, is just as grand, if not more so.

Paneer Lababdar is the fancy vegetarian main dish you’ve been seeking. Impressive enough for any celebratory gathering and simple enough to make on a weeknight.

Paneer lababdar traditionally takes a long time to make, but my recipe is made in minutes and requires you to dirty just one pan. How’s this possible? My onion masala, of course. Make it once, and it’ll feed you for weeks, maybe months.

At first glance, this north Indian dish might seem similar to other popular creamy tomato-based paneer recipes, like paneer makhani or matar paneer, but make no mistake, paneer lababdar is its own distinct dish.

It calls for ghee, cream, cashews, and – the main thing that differentiates this dish from the rest – the paneer, prepared two ways. This recipe calls for both shredded paneer and larger paneer pieces, preferably triangles.

It’s not every day that you see shredded paneer in gravy, but that’s what makes this paneer lababdar recipe inimitable (silly story: while writing this blog post, I asked my husband, who was sitting next to me, scrolling through his phone, if he knew another word for “stand out.” Without pause, he replied with “inimitable.” I asked him how in the world that word came to mind so quickly, and without answering me, he started playing the Hamilton song, “Wait for It,” and when I tried to interrupt the song to ask him what was happening, he told me to “wait for it.” 😂 I eventually heard the line, “I am inimitable, I am an original.” I just thought you should know this happened, lol).

If you’re familiar with paneer, then you know it’s a cheese that doesn’t melt. That means the shredded paneer mixes into the curry, adding texture so that you get a spoonful of cheese in every bite.

After you shred the paneer, you’ll want to slice the remaining paneer into either cubes or, to really make this a showstopper of a dish, take a few extra minutes and cut the paneer into triangles!

Here’s how to make paneer lababdar:

This creamy, mildly spiced, aromatic curry is sure to be a hit with kids and adults. It’ll be the star of your meal. 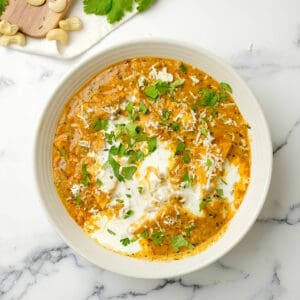