Paneer butter masala might be the most popular paneer dish ever. If you haven’t heard of it, think soft paneer in a creamy and buttery, well-spiced, tomato-based sauce. You may also know this dish by another name: paneer makhani.

Paneer butter masala is similar to my popular butter chicken recipe and my butter chickpeas recipe, but it’s also a bit different in that I add cashews to this sauce. I like adding cashews to this paneer dish – it makes the sauce a little thicker and a little richer. If you don’t like cashews, you can use almonds or leave it out if you want.

The great thing about this dish is that it’s so simple to make, especially if you have my pre-made onion masala handy. You just heat the ingredients and add the paneer. Simple and tasty.

This recipe is part of my onion masala series called: Onion Masala LOVE. This series started with me sharing recipes using this masala throughout February, but it has been so popular that I’m going to keep it going as long as there’s interest! My goal: to show you how easy it is to prepare Indian food daily.

Click on the image below to find out how to make onion masala, store it, and find other recipes that call for it!

I like using onion masala in this recipe because it adds a lot of flavor, and there’s also no need to cook down the tomatoes. If you don’t have onion masala handy, then you can try using canned tomato sauce as that’s already cooked down though I haven’t tested it this way for the blog.

Nowadays I typically use store-bought paneer because it’s so easy to find at my local Indian store. I’ll share a recipe for homemade paneer sometime over the summer though!

Serve this paneer makhani with Indian flatbread or basmati rice.

To make this more of a complete meal, add one or two of these dishes too: chana masala or aloo methi or veggie biryani or aloo baingan masala or this Indian bean salad 🙂 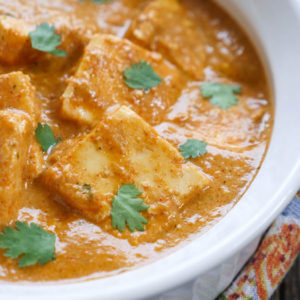