This Christmas Chocolate Bark is festive in both look and flavor! Spices like cinnamon, cardamom and freshly grated nutmeg give this chocolate bark that little something extra. Pistachios and pomegranate seeds add color and crunch. To me, everything about this bark shouts Christmas!

This year, Roby will be working on Christmas day for the third year in a row. We go to midnight Mass the night before, then on Christmas morning, Roby heads off to work and I head to the kitchen (for some reason, the feminist in me feels like there’s something wrong with this sentence… even though there absolutely isn’t). Last year, I baked a teeny tiny ham for the two of us. Roby called me thirty minutes before his shift was about to end and asked if the other residents who were working could come over too. I obviously said yes… no one should be alone on Christmas. But, as soon as we hung up, I had a minor freak out. I had made small portions of everything since I thought I was only cooking for two (green bean casserole, mashed potatoes, roasted vegetables and our ham). I quickly took ALL of the bacon that I had in my freezer and stuck the packages under warm water to help thaw the meat. I got the bacon into the oven just in time. We literally had a huge plate of bacon sitting next to our tiny ham in case there wasn’t enough food. Thankfully everything turned out just fine and I think everyone’s bellies were full by the end of the night.

This year, I’m going to be prepared. I plan on cooking up a special Christmas meal for 10 (just in case) 😉 For dessert? Some pies and cakes, and of course, this Christmas Bark. 🙂 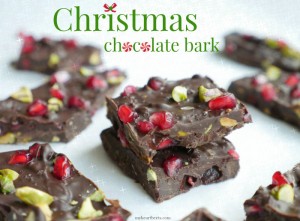