An Indian spiced broccoli soup that you can make on the stovetop or in an instant pot! This soup is vegan, made with broccoli, coconut milk, curry leaves, and a few spices.

We are giving broccoli soup an Indian makeover! But before we talk about this Indian style broccoli soup, I have to tell you how excited I am. Tomorrow, Roby and I will celebrate our ONE YEAR wedding anniversary! I’m clearly still in the “honeymoon stage” of marriage, so please excuse the gushing. It’s just that, I feel like our weddings were just yesterday. I say weddings because we had two… in one day. It was so wonderfully chaotic. I was actually an hour late to our second wedding. It really wasn’t my fault though! I had like 30 pounds of Indian jewelry and a million safety pins that took forever to take off from the first wedding.

Join me as I reminisce! Here’s how our special day went. So, on October 5th of last year (2012), we had a Sikh ceremony in the morning followed by langar (lunch).

Then, I had maybe two hours to change my outfit, hair and makeup for the next wedding – a Keralite Catholic wedding.

Do you see how different I look? THAT takes time. I remember being so worried Roby would be mad at me for being late to our (second) wedding, but he wasn’t mad… just stressed out lol. He was happy to finally see me when I did walk down the aisle. The good thing is we were already married, so it’s not like he was worried about me standing him up at the altar.

It was such a happy day – I don’t think I’ve ever smiled so big in my life. Roby doesn’t seem quite as happy as me in the picture below, but I assure you, he was (I think, lol).

Our families are from different parts of India (mine is from the north, his family is from the south) and they practice different religions so there were several customs that we took part in throughout the week. We had a sangeet, mehndi (henna), rehearsal dinner, and a few other smaller events. Anyone who thinks Greek people have big weddings should attend a week-long Indian wedding. It was a stressful week, but on the day of, everything was absolutely perfect (minus the whole me being an hour late to our second wedding, lol).

Here’s one of my favorite pictures from our reception. It was taken during our first dance. Roby totally looks like a Bollywood star, right?

Okay, now back to this Indian-style broccoli soup. I almost forgot about the reason for this post!

Broccoli isn’t a commonly used vegetable in Indian cuisine as it’s not native to the area. This soup is a nice way to *marry* broccoli with Indian spices. If you like broccoli soup and Indian food separately, then I’m sure you’ll love them together in the form of this soup!

It’s the perfect thing to sip as you take a trip down memory lane. 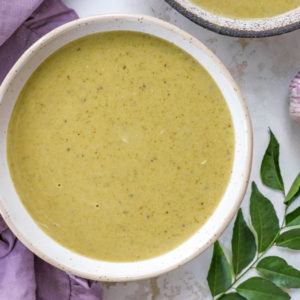 You can top this with some (cheddar) cheese if you'd like an Indian broccoli cheese type of soup 🙂
Did you make this recipe?Tag @myheartbeets on Instagram and hashtag it #myheartbeets!