You know that crucial ingredient in my tomato-onion masala? The tomatoes? Well, I got rid of them! If you love Indian food but can’t eat tomatoes, this nomato onion masala is going to change your life.

I’m sharing a tomato-less version of my onion masala! This nomato onion masala is for those of you who can’t eat tomatoes or nightshades.

Now you can make my super simple, pour and cook recipes from my onion masala series using this tomato-less onion masala!

What is Nomato Onion Masala?

So what is nomato onion masala (for those who skipped right to this section and didn’t read a word above…)? It’s basically my onion masala sauce but without tomatoes, hence NO-mato masala.

This nomato masala somehow tastes nearly identical to my original recipe and to be completely honest… even I’m surprised. 🤷🏽‍♀️I didn’t expect this tomato-free masala to be this good.

Yep. No tomatoes in here. ⬇️

You’re probably thinking “okay Ashley. you’re telling me that a bunch of carrots, an apple and a couple beets somehow taste like tomatoes?”

I know… BUT YOU GUYS. JUST TRUST ME. Somehow these ingredients when combined with tamarind paste and the right spices… well, it just works.

Truthfully, the first time I made this I was fully expecting this recipe to bomb (the non-millennial meaning of bomb, like, fail).

But it’s amazing. It really does taste just as good as my tomato version.

“Ashley is a genius! Indian foods have long been my favorites, but since my diet is now free of dairy and tomatoes, my options were very limited. This masala is an amazing foundation for so many of the recipes on the site and it makes the food preparation faster than picking up carry out. Seriously!”

Over the years, I’ve gotten many requests for tomato-free Indian recipes.

When I first shared my onion masala series on the blog, many of my tomato-free readers told me how much they loved the idea and wished there was a tomato-free option for them.

Well, now there is.

Whether you’re allergic to tomatoes or can’t handle their acidity or can’t tolerate nightshades or are following an autoimmune diet or well – whatever your reason for avoiding tomatoes – you can now make my nomato masala and create delicious Indian recipes in a fraction of the time.

“Thank you so much for this recipe! I was devastated when I found out tomatoes are extremely high in histamine and were making my mast cell activation syndrome (MCAS) worse. This stuff tastes almost indistinguishable from your regular masala and it’s made me discover I like beets way more than I thought I did!”

To make this masala, you will need the following ingredients (for the full list/amounts, see the recipe card below):

I have a feeling that this recipe is forgiving. So if you want to reduce the beets, you can probably use more carrots instead. Or if you don’t want to use carrots, you can try pumpkin puree or some kind of squash. But if you want a foolproof recipe, try it the way I’ve written below.

Why make a tomato-less onion masala?

There’s no reason to avoid tomatoes unless you have to avoid them. If you are perfectly happy eating tomatoes, please don’t for a second feel like I’m telling you to stop eating them. I personally love tomatoes. But as I’ve learned, there are many people out there who cannot tolerate tomatoes and some who cannot tolerate nightshades at all. This tomato-free onion masala is for this particular group of people.

Why am I sharing this kind of recipe? When I first started my blog six-ish years ago, I was navigating some health issues and while I’m mostly good now (still have to eat gluten-free), I can understand wanting to eat in a way that doesn’t cause pain.

If you or a loved one can’t eat a certain food group or a commonly used ingredient, I feel for you. And if you’re Indian and can’t eat tomatoes, well gosh, I really feel terrible for you. I hope that this recipe makes your life a little easier.

The following recipes have been tested using this nomato masala in place of my regular onion masala:

I will update this list as I test more recipes, though I am fairly certain this masala can be used in any recipe.

The great thing about this masala is that since it’s already cooked, you can always add more of it to a finished dish if you feel that it needs even more flavor.

You can find a full list of my onion masala recipes here. Note that not all of these recipes will be suitable for those following a strict nightshade-free diet – feel free to adapt or make up your own recipes using this masala as well.

How and why to freeze this masala?

I freeze this masala in this silicone tray (the same way that I freeze my regular onion masala). Each little container is ¼ cup which makes it easy to measure and use in my onion masala recipes.

Spend a little time making this masala one day then freeze it and use it in pour/cook and easy stir-fry recipes on busy nights. Having this handy will make cooking healthy Indian food a breeze.

Time for a quick story. When I first made this tomato-less masala, I used it to make my Corn Kadai. My (very) picky husband ate it and didn’t even notice! The second he finished his last bite, I immediately blurted out that there were no tomatoes in the corn kadai. I told him all about my nomato masala and he was surprised and said, “that has to go on the blog.” I know you guys don’t really know my husband (or if you’ve read my blog long enough, maybe you do, ha) but he keeps it (a little too) real. You can trust that this masala is going to be good.

Let me know what you think of this nomato masala, my tomato-free friends! 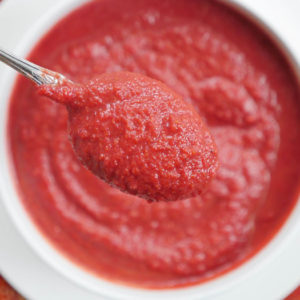 How to make this on the stovetop