Wondering what to make for dinner tonight? Put this paneer onion masala stir-fry on the menu!

This paneer recipe takes no time at all as long as you’ve got some pre-made onion masala handy! I tell ya, that stuff is magic sauce. You can do so many things with it! And this paneer onion masala stir-fry has to be on your list of things to make!

This dry paneer dish is part of my Onion Masala series where I share recipes that call for exact amounts of onion masala, which you can make in bulk in advance. Having this masala ready to go makes it so easy to cook Indian meals! I’m talking minutes. It’s meal prepping at it’s finest!

Click on the image below to find out how to make onion masala, store it, and find other recipes that call for it.

Using onion masala in this tawa paneer (stovetop paneer) recipe cuts down cook time significantly because there’s no need to cook down tomatoes/onions. You add the onion and tomato masala to the pan along with some spices and green bell pepper. Just look at how the masala clings onto the paneer:

I shared another paneer recipe not too long ago, also calling for onion masala: paneer makhani. Even though that paneer dish also called for onion masala, the flavor couldn’t be more different from this recipe. That paneer is soaked in a creamy cashew sauce while this one is coated with a spiced onion masala sauce and is more of a stir-fry type of dish.

You can also serve this with plain basmati rice or pea pulao, or any type of Indian flatbread. 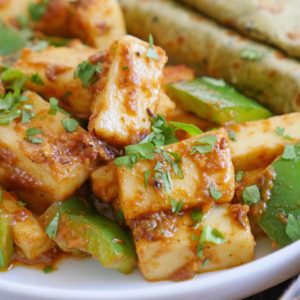 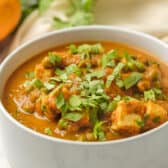