chicken tikka masala biryani? trust me on this!

This recipe is really easy to make! There’s no need to marinate the chicken – you just cook everything in one pot! That means there’s less to clean, which makes me very happy. 🙂

I’ll share a version with just the curry soon for those who don’t want to try this super cool unique dish 😉 In the meantime though, I have a slow cooker chicken tikka masala curry on the blog that you can check out. I’m also working on a version using my onion masala (stay tuned!). There’s no such thing as too much chicken tikka masala, right?

Let me know if you try this! I can’t wait to hear what you think! 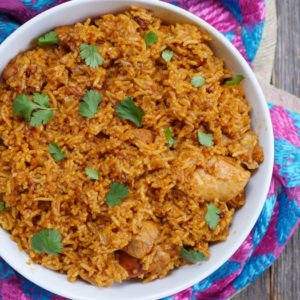 Chicken tikka masala, a creamy spiced tomato chicken curry, is said to be a British invention. I decided to invent a new dish by adding rice to the curry, making it a one-pot meal.
4.76 from 25 reviews
Pin Recipe Print Recipe
Servings 4
Cuisine Indian