This sweet, creamy, milky rice pudding is a popular Indian dessert that you can make in minutes, thanks to the instant pot!

We almost always have those three ingredients at my house, making this an easy dessert to throw together at the last minute. If you’re dairy-free or vegan, full-fat canned coconut milk works as a great substitute for whole milk in this recipe.

If you’ve never tried kheer before, it’s essentially a milky pudding-like dessert with a thinner consistency than American rice pudding. Even though most folks refer to kheer as an “Indian rice pudding,” I’d say it’s actually more like a dessert soup. I guess “dessert soup” isn’t really a thing, though.

The great thing about kheer is that you can serve it year-round. When the weather is cold, I prefer to serve warm kheer, and when it’s hot outside, I like to serve it chilled.

If you’re interested in the history behind this dessert, in his book, The Oxford Companion to Food, Alan Davidson writes that kheer likely originated in Persia, “where a similar dessert is known as sheer birinj (rice pudding).” Sheer is a Persian word that translates to milk. The word kheer, derived from Sanskrit, means milk too (though interestingly enough, in Persian, the word kheer means something entirely different… a bodily part I won’t mention here, but perhaps my Persian readers will get a good chuckle).

But Indian food historian K.T. Achaya writes in his book, Indian Food: A Historical Companion, that payasa, a dessert made of “rice cooked in milk and sugar” is mentioned in Buddhist literature, which would likely predate the sheer.

To me, the idea of combining milk, sugar, and rice seems pretty obvious, especially when you’re working with few ingredients, so I can see how both of these origin stories might be true. Perhaps one version was already present and then later given another name? After all, the word kheer is typically used in North India (which was conquered by the Mughals), whereas in South India, this type of dessert is referred to as payasam.

Anyway, you can make many different kheer varieties, but the most popular type of kheer is made with rice. This type of kheer is also known as chawal ki kheer, which translates to “rice kheer.” I also have recipes for carrot kheer and a south Indian dal kheer, better known as moong dal payasam.

Why Make Kheer in an Instant Pot? + My Secret to Keeping Milk from Burning:

Before getting my electric pressure cooker, I rarely made kheer, and that’s because it would take ages to make on the stovetop. You’d have to stir and stir and stir to keep the rice from sticking and the milk from boiling over. Not anymore.

This dessert is now effortless to make in an Instant Pot.

If you’ve made kheer before, then you know it can be tough to prevent milk from burning at the bottom of the pot. I have a secret to making kheer in the instant pot – a method that will keep the milk from scorching. Once you try my recipe, I’m sure you won’t go back to making kheer on the stovetop again.

Is kheer better hot or cold?

You can serve kheer at any temperature – warm, hot, or cold. There’s nothing better than a bowl of warm kheer when it’s chilly outside. And when it’s scorching hot, a chilled bowl of kheer is the most refreshing dessert.

What do you eat with kheer?

Nothing, you just eat it with a spoon! You can top the kheer with crushed nuts and golden raisins if you’d like – I like the contrast in texture.

What type of rice is used?

I use fragrant white basmati rice, but you can use another type of white rice if you prefer.

How long does rice kheer last?

I suggest eating kheer within two days of making it.

How do you thicken Indian Rice Pudding?

To thicken this pudding, press sauté on the instant pot and stir until the kheer reaches your desired consistency. It will also thicken a bit as it cools down. 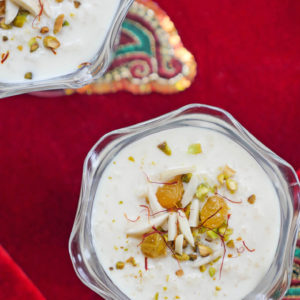 Kheer, a creamy rice pudding, is one of my favorite desserts to make and eat. It requires just a few essential ingredients: rice, milk and sugar. I almost always have those three ingredients at my house. You can serve this dessert at any temperature and it’ll taste good. When the weather is cold, I prefer to serve warm kheer, but if it’s hot out, then I like to serve it chilled.
5 from 62 reviews
Pin Recipe Print Recipe
Servings 4 -5
Cuisine Indian 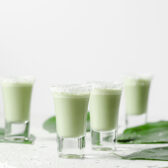