The minute I posted my 3-ingredient paleo naan recipe, I started getting requests for a nut-free version. Well, this Paleo Roti is nut-free and it’s equally delicious. Ironically, this nut-free flatbread has a slightly nutty flavor. Like the naan, this paleo roti is also made with just three ingredients. (I also have a gluten-free and nut-free coconut flour naan!)

For those of you who don’t know, roti aka chapati is an unleavened Indian flatbread. While naan is usually served in restaurants, roti is what most Indian families eat at home. It’s usually slathered in ghee and used to scoop up curries.

I miss eating roti – I have so many great memories associated with it. As a kid, my favorite way to eat roti was to put an Indian spiced omelet on top and roll it up like a tortilla. This gluten-free flatbread hits the spot. It fills a strange void that roti left behind.

Like the paleo naan, this paleo roti is super easy to make – as easy as making pancakes! There are a few things you’ll need to know when using ground flaxseed meal though so be sure to read through the recipe and notes!

Here are the 3 Ingredients You’ll Need:

Mix the three ingredients in a bowl and pour a ¼ cup of the batter onto a greased or non-stick frying pan. Repeat until you’re done with your batter. This paleo roti takes some time. All stoves are different, so while medium heat works for me – if you find the outsides are browning too quickly, lower your heat and be patient 🙂

You will notice that as the batter sits in your mixing bowl, it will become thicker. That’s because flaxseed meal soaks up moisture quickly. Feel free to thin out the batter by adding more coconut milk. Otherwise, your first roti will be thin and your second will be a bit thicker. Adjust according to your preference.

When it comes to this paleo roti, these three ingredients are a starting point. Have fun experimenting with spices and veggies.

Like Indian food? Then be sure to check out my Paleo Indian eCookbook: South Asian Persuasion! It has 100+ Paleo Indian Recipes (gulab jamun, anyone?) 🙂 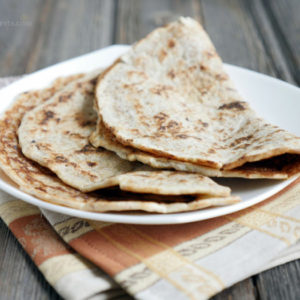 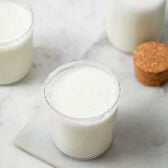