This slow cooker saag recipe is incredible. It’s so rich, buttery and delicious that you’ll forget you’re eating vegetables. Seriously. It’s THAT good. This recipe is the real deal. It’s how this popular Indian dish should be made. This isn’t just any saag, it’s Sarson ka Saag.

A little background on this dish – Saag just means pureed greens, so when you order this dish in a restaurant, chances are that it’s slightly different at each place. Some will add kale, broccoli, even brussels sprouts to their saag (I’ve even made saag using foraged ramps also known as wild leeks). Many make “Palak Saag” which is saag made with spinach. My favorite saag is authentic Punjabi saag or “Sarson ka Saag” which translates to “saag made with mustard greens.” This Punjabi saag is typically made with mustard greens, some spinach and lots and lots of ghee. There’s no negotiating on the ghee. It’s essential.

This Saag recipe is right up there in awesomeness with my Paleo Butter Chicken. The best part about this traditional recipe is that I didn’t have to “make it Paleo.” It’s Paleo by default.

What I love about this Sarson ka Saag is that it’s so thick and luxurious. Some of you may be wondering if you can make this saag using just spinach – don’t do it. Using spinach alone will make for a thinner saag. The mustard greens thicken it up and make for much better texture. I use an equal portion of mustard greens and spinach but you can add more mustard greens if you prefer.

Saag is traditionally eaten with Makki ki Roti aka a flatbread made with corn. I like eating this saag with my Spicy Indian Flatbread but you can also use my Paleo Naan or Paleo Roti recipes.

Once the saag is ready, you can mix in some paleo paneer, meat or potatoes at the end if you’d like. Just don’t forget to serve it with a dollop of ghee on top! 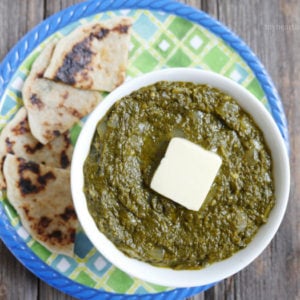 The reason you don’t want to place a cover on the pot while boiling the greens is because doing so will cause the pretty green color to fade.
Did you make this recipe?Tag @myheartbeets on Instagram and hashtag it #myheartbeets!

Like Indian food? Then be sure to check out my Paleo Indian eCookbook: South Asian Persuasion! It has 100+ Paleo Indian Recipes (gulab jamun, anyone?) 🙂