This savory Indian pancake is a spicy pan-fried bread made with fresh cilantro, red onion, and Indian spices. It’s easy to make and it’s also filling and delicious.

This recipe is the paleo-friendly version of besan ki omelet – which translates to “omelet made of chickpea flour.” This is a paleo recipe and so I didn’t use chickpea flour in the dish. This is also an egg-free and vegan recipe.

Growing up, my parents would make me besan ki omelet for breakfast or as a snack when I’d get home from school. I’d put some ketchup or green chutney in the middle and then roll it up. If you can make my 3-ingredient paleo naan, then you can definitely make this spicy Indian flatbread. This paleo and vegan omelet is also known as besan puda or besan cheela/chilla and can be made with whatever veggies you’d like. Try it with tomatoes or mushrooms!

A note on besan flour aka chickpea flour: While it is gluten-free, it’s not “paleo.” If you decide that you’re okay with eating chickpea flour, then see my notes in the recipe below. A word of caution though – if you use garbanzo flour, make sure it clearly states “gluten-free” on the package. If you have celiac disease, consider calling the company to find out how they avoid cross-contamination – specifically ask if they have a separate mill. I have called a couple of companies in the past and have been told they do not use a separate mill or that they don’t know if they use a separate mill (um, okay).

Anyway, I like my pancakes to have slightly crispy edges and so I’m pretty liberal with oil/ghee. I absolutely love this little pancake – it makes for the perfect breakfast, snack, lunch or dinner. 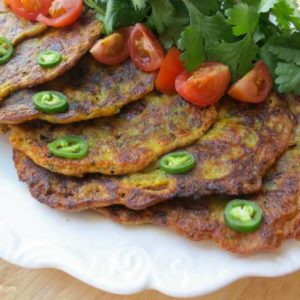 I like my pancakes to have slightly crispy edges - if you want yours to be slightly crispy, just add more oil and shallow fry. These do take awhile to fry, so try to use a large pan so that you can make a few at a time! *If using chickpea flour - leave out the almond flour, tapioca flour, and coconut milk. Add 1 cup chickpea flour and then add water as needed for a pancake batter consistency.
Did you make this recipe?Tag @myheartbeets on Instagram and hashtag it #myheartbeets!