Why is it sneaky? Because even though it looks like an ordinary apple crisp… it’s actually special. Like, very special. This apple crisp is special because it’s made with a unique blend of somewhat unexpected spices. I’m talking about garam masala. “Garam masala” translates to “warming spices” and that’s exactly what they are.

So what’s in garam masala? Cardamom, cinnamon, cloves, cumin, black pepper and coriander. The last three don’t seem like “dessert spices” but that’s what makes the flavor of this dessert so unique! Don’t get me wrong – the spices aren’t overwhelming, they’re actually very subtle. But using them adds a fun twist to this classic dessert.

I’ve used garam masala in a dessert before – remember my garam masala pumpkin pie? I made it twice last year, for Thanksgiving and for my husband’s birthday and it was so good! I like this apple crisp just as much. There’s something you should know about me… I am the queen of kitchen gadgets (read: kitchen gadget addict). Some of my gadgets are useful and some are not. BUT I have to tell you about my new very useful discovery: an apple corer. I seriously do not know what I did without it. How did I core apples? Like a fool… that’s how. I know, that’s dramatic but I feel like my apple corer is a game changer… I am so sure that I’ll be eating twice as many apples now.

I have no idea how it’s possible that I bought myself a kiwi peeling tool (horrible for cutting kiwis, but great for lifting small cupcakes/egg muffins out of cupcake pans) and a pineapple scooping tool (plain awful purchase) BEFORE buying myself an apple corer. It just doesn’t make sense. (BTW, my next purchase: I want to try out this pineapple corer which is different from my scooping tool… do you have it? The reviews look good…. annnnd I sound like an addict.) I love the combo of sweet spiced apples topped with crunchy chopped pecans and walnuts. To make this look a little fancier, you can even drizzle melted coconut butter on top!

This is such an easy and simple dessert to make – it’s plenty for 2 and enough for 4 if you serve a little ice cream on the side. 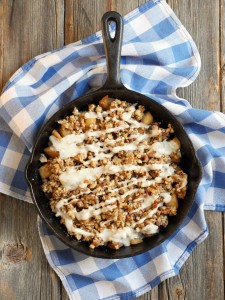