Smoothies make me feel like a kid again. I’m not talking about the energy they provide – though there’s that too. I’m taking about the feeling I get when I throw a bunch of stuff in a blender and press… blend. It’s exciting. Sometimes I get carried away and have to force myself to drink whatever I’ve created… and then there are times when I make something awesome, like this spinach cardamom smoothie.

I love using spices in smoothies (see: mango chai smoothie). Just a pinch adds so much depth to a smoothie… and yes, smoothies can totally have depth. This green smoothie is made with spinach, avocado, cardamom, banana and (almond) milk. The avocado makes this drink so rich and creamy.

I usually make smoothies in my nutribullet (it’s a blender that’s fancier than a magic bullet but less expensive than a vitamix). I like it because it’s easy to clean up, but one day… I’ll probably upgrade to a vitamix (hint to hubby: someone’s birthday coming up…).

If there’s a secret to making a good smoothie, I’d say it’s using a frozen super ripe banana. I don’t really care for eating actual bananas (although, I make exceptions for green/unripe bananas). But… give me a frozen ripe banana, and we’ll be fast friends (who drink smoothies together). 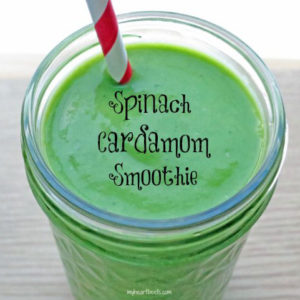 If you don’t care for drinking pieces of the cardamom shell, just remove the seeds and finely grind – or use a big pinch of cardamom powder.
Did you make this recipe?Tag @myheartbeets on Instagram and hashtag it #myheartbeets!