Tuna noodle casserole is comfort food. There’s just something about this hearty hot dish that brings back memories of childhood.

Think of this recipe as a gourmet grown-up version of the tuna noodle casserole you grew up eating. We’re switching out noodles for spaghetti squash and replacing canned cream of mushroom soup with a spicy and flavorful homemade version.

I think the only thing that’s the same in my version vs. the mostly processed version is the peas. And, if you don’t like peas, I suppose you can substitute them for something else.

The great thing about using spaghetti squash as a base for this casserole is that it’ll stretch the dish for several meals. I’d say this dish could easily feed six people. I’ve already had it for like 4 meals and there’s more than half left. It’s so delicious that you’ll look forward to leftovers. This with some hot sauce (cholula, please) – ohh man, what a combination.

A note about my homemade cream of mushroom soup – when you blend this together, I suggest blending the soup until it’s nice and thick so that it better coats the “spaghetti” strands.

When you put this in the oven, it’ll get nice and bubbly. After it’s done cooking, top it with a mix of almond flour and butter or ghee and bake until golden on top!

“Another stellar recipe; thank you Ashley! I’m basically snowed in here in eastern Washington and was scouring the pantry for dinner ingredients. With the last spaghetti squash from my summer garden and some “vintage” dried porcini mushrooms, I pulled it together. WOW that mushroom soup is AMAZING in itself – next time I’m making it to eat on its own. We’ll enjoy this delicious and healthy dish for a few meals; thanks again.” 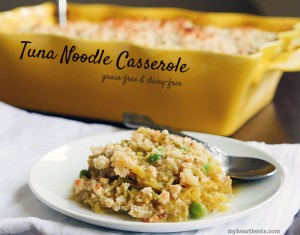